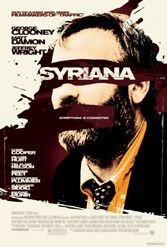 An American intelligence official on the outs (Clooney) discovers his agency intends to assassinate a pro-democracy, Nasser-like emir to ensure that his self-indulgently corrupt but pro-Washington, petrodollar father and brother maintain control of a strategic nation. Meanwhile, instability in the oil fields leaves young Muslim emigrants to Saudi and Gulf refineries unemployed, bored, and ripe for terrorist pickings.

The complex threads are pulled together seamlessly thanks to writer-director Stephen Gaghan’s focus and stalwart acting from Clooney, Matt Damon, Chris Cooper, Amanda Peet, and Christopher Plummer. The film was savaged by pro-Bush talking heads as an anti-American rant. It’s not. Instead, it’s about how the right choices often depend on which bad guys you pick. Good propaganda, in the end, for the sanctity of amorality. Whatever happens in Iraq, director Gagen’s film will endure as handsome, lucid, and brave. It’s a movie about the food chain called oil and the casualties provoked by those who feel they need to control it.