Synth and so much jazz 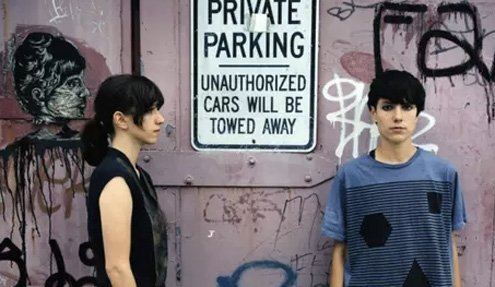 Busy Gangnes and Melissa Livaudais of the Brooklyn synth due Telepathe (pronounced telepathy) are back with "Destroyer."
I

first heard Telepathe on a 2007 demo of “Bells” nicked from a lesser music blog of the era. Though the forward-thinking Brooklyn-based synth-pop duo had been around in some capacity for three years, they only had two official releases and an album on the way. Yet there was convincing evidence they could be an integral part of indie music’s future.

But Busy Gangnes and Melissa Livaudais go such long stretches between releases they can sometimes seem like a distant memory. Telepathe’s sophomore album, Destroyer (BZML), comes six years after their lauded debut, Dance Mother. That we have it at all is no small wonder. Caught in label limbo for two years, it was finally released on their own BZML (for Busy and Melissa) imprint. As a result, Destroyer feels like a snapshot of what the band’s two core members were like when they were actually creating this music in 2011-12. It’s a window into a future past.

For diehard Telepathe fans, Destroyer will mostly be a refresher. The last official release before the record was the album’s title-track as a single in 2012. “Throw Away This” was the a-side to a 7-inch released in 2011 (the original version of “Destroyer” was on the flip). Audiences from 2012 shows may also remember “Slow Learner” and “Fuck You Up.”

Telepathe’s strengths and weaknesses are on display in the same way they were when they first surfaced on The Social Registry in 2006. The duo’s use of percussion and shimmering synths clash just as often as they gel, which is part of what makes them so interesting. For every “Damaged Raid,” you’ll also have the soaring “Something is Home.” For every cluttered “Onyx,” you’ll also get the gorgeous “Nights Spell,” and Livaudais’s saccharine refrain of “I’m under / You got me.”

This is an act that doesn’t change. Despite the years, despite the label trouble, and despite the moving zeitgeist, Destroyer remains synth-pop on a perpetually shambolic edge, and that’s rewarding.

Defying the years in a different way is an album courtesy of Portugal’s small but thriving improvisational jazz scene. Transcending decades with takes on Philip Cohran, Sun Ra, Charley Patton, and a few originals, the Italian quintet Roots Magic pays homage to black music of the 20th century. Their Hoodoo Blues (Clean Feed) is a properly recorded and finely performed.

Roots Magic doesn’t adhere too strictly to any one tradition like, say, Walt Weiskopf. They are dedicated to head-bop, low-key tracks that slip in and out just before coming to a boil. As an inexperienced listener, you never feel overwhelmed; as someone familiar with the originals, you won’t have trouble appreciating their agenda.

In songs like Philip Cohran’s “Unity,” and Sun Ra’s “A Call for All Demons,” the band piles on groove and mood. Sporadically accompanied by Luca Venitucci on melodica, organ and zither, Hoodoo Blues also features two originals, “Blues for Amiri B” and “The Joint is Jumping,” which slot in seamlessly among the rest. The downcast “Dark Was the Night,” a riff on Blind Willie Johnson’s original, may be the highlight.

Roots Magic is an ideal entry point for those unfamiliar with Lisbon-based Clean Feed Records, a label founded in 2001 to further jazz in Portugal. Long a fixture in Europe’s jazz scene, Clean Feed has offered up plenty of great releases from the likes of Nate Wooley, Jason Roebke and Gard Nilssen already this year. Roots Magic, however, hits its own transcendent sweet spot.