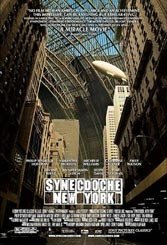 Charlie Kaufman’s writing is an acquired taste. Or isn’t. While admirers will hail his directing debut as a sardonic examination of a neurotic playwright’s life, skeptics will see it instead as self-indulgent wallowing in “life imitates art” motif with the featured playwright a fear of mortality caricature whose only task is to cast and recast the characters destined to live him out. Hardly exalting stuff either way.

Kaufman’s playwright is Caden Cotard (Philip Seymour Hoffman), an upstate New York hypochondriac married to miniature painter appropriately surnamed Adele Lack (Catherine Keener). When she leaves him for a lesbian relationship in Berlin, daughter Olive in tow, “lonely, fucked up” Caden is exposed to the “everything” that is life, including the attentions of cloying ticket-taker Hazel and his affected lead actress. What follows is a time-space rupturing stream of consciousness in which Caden writes his own great American play by filling it with surreal copycats. Kaufman’s Jewish angst machine can seem like a creepily hallucinogenic imagining of the early Woody Allen, absent Allen’s sweetness. He mistakes the surreal for the creative. Little Olive turns into a tattooed German tramp, Hazel (who fears fire) lives in a burning house, dreaming genius Caden sees his pustules come and go — until the small stage of Caden’s early years expands into an canvassed warehouse of aging doppelgangers.

All this is intended as pathetic-poignant-ironic riff on Kaufman’s twin-specialties, depression and postmodern doubt. Confused Caden, a man standing in for a lifetime, coyly wants us to stew in menstrual blood and nocturnal emissions, the parodic stuff of day-to-day brooding. Early on, before Adele flees for Berlin, Caden tells her, “I don’t know why I make it so complicated.” Her reply: “That’s what you do.” That’s also what Kaufman does, and not even the best of actors — count Hoffman — can inject much life into human façades that depend on putting the “lonely and fucked up” on a dramatic loop. The Synecdoche title has less to do with New York and more with the Greek root “to stand in for,” as in “transistor” for radio or Caden for himself.