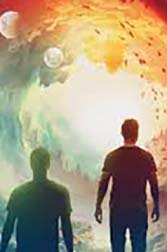 Justin Benson and Aaron Moorhead have spent their careers bending genre conventions. In 2014’s “Spring,” the filmmaking duo crafted a “Before Sunrise”-like tale of two mismatched 20-somethings meeting by chance and falling in love, only to add a surprising monster-movie twist. In “The Endless” (2017), the two star as brothers returning to the cult where they spent their formative years, and what feels like a classic horror setup is transformed into a trippy sci-fi thriller that transcends quantum physics. “Synchronic” sees Benson and Moorhead returning to time travel, albeit less successfully than in previous efforts.

Steve (Anthony Mackie) and Dennis (Jamie Dornan) are a pair of paramedics who begin noticing a strange coincidence among late night emergency patients: those with odd injuries have all recently ingested a mysterious new designer drug known as “Synchronic.” It turns out the drug has the ability to send the user back in time for precisely seven minutes. When Dennis’s rebellious teenage daughter takes the drug and mysteriously disappears, Steve takes it upon himself to rescue his friend’s offspring and bring her back to the present. “Synchronic” has an undeniably goofy premise that would suggest a light-hearted film. But with only a few exceptions that’s not what the directing duo delivers.

The opening 45 minutes are nothing short of disastrous. The eerie score and dialed down performances create a spooky atmosphere that the story can’t match. Dennis’s wife and daughter are badly underwritten, so much so it’s impossible to tell whether his relationship with either of them is friendly or contentious. A barely relevant subplot in which Steve is diagnosed with brain cancer feels misconceived to the point of unintended hilarity.

Only when Steve begins experimenting with the drug himself that the directors start to fulfill a portion of the story’s potential. Various time travel encounters with a caveman, an early European settler, and the Ku Klux Klan provide some much needed excitement, but as a whole “Synchronic” still feels like a mishmash of ideas that need to be simplified and streamlined in order to make a coherent, fully enjoyable feature. The good news is that we still have directors making low budget genre films with this level of originality and imagination. But artists who take pride in thinking outside the box aim high, a good thing until you miss the target. It happens.