Sympathy for the Devil: Four Decades of Friendship with Gore Vidal 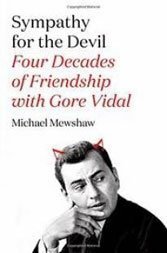 In recalling his long friendship with Gore Vidal, novelist and author Michael Mewshaw provides all the guilty pleasures of a Vanity Fair article plus one other: greater length.

Mewshaw’s book is a 195-page portrait of the American author, unrequited politician and ageless enfant terrible whose heroic output of mostly historical novels (including “Burr” and “Lincoln”), essays, screenplays and plays was overshadowed by appetites for drink, sex and recognition. In his 1960s-70s heyday, Vidal’s feuds and tussles with the likes of Norman Mailer, William Buckley and Truman Capote were legendary, even becoming fodder for U.S. network talk shows. “I am exactly as I appear,” Vidal said at one point. “Beneath my cold exterior, once you break the ice, you find icewater.”

Mewshaw’s book strives to prove Vidal wrong, showing how the older, West Point, N.Y.-born author folded his acolyte into the flock of celebrities he attracted. In the end, however, Vidal, who died in 2012 at 86, comes off as something of a human “Grey Gardens.” Like the Hamptons House portrayed in the 1975 documentary film by the Maysles brothers, traces of original grandeur still flicker in Vidal, a literary edifice that was otherwise tumble-down, rambling, and self-contained.

Mewshaw, who lived in Italy for long stretches, paints a magical picture of expatriate life in Rome during the 1970s when the kidnapping of political leader Aldo Moro by the terrorist group the Red Brigades finally snuffed the fading glow of the Dolce Vita years.

Mewshaw’s experiences remind those who have forgotten (and those too young to know) about making a living as a writer in pre-academic, pre-MFA days, when upscale magazines paid expenses for Italian interview trips. However, perks such as long stays in Vidal’s beautiful villa in Ravello and parties with literary celebrities seem unable to compensate for Mewshaw’s disputes with publishers, his arguing with director Lina Wertmuller over a screenplay, or rising rents in Rome.

His reminiscence will grimly gratify aspiring or excluded writers with proof there was once a literary scene (closer to a cabal) that minded its own gates and attended only parties where the people were prettier and the guest list was better. But the book will also console them, because when the party was over — and it now seems over for good — these weren’t necessarily people you wanted to spend time with.