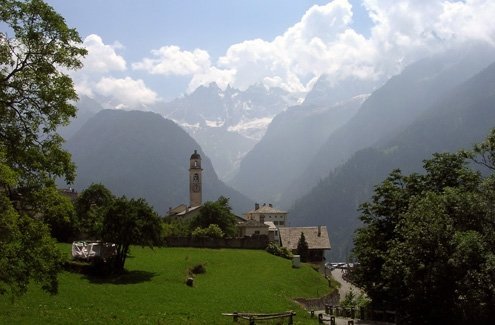 A hiker's approach to Soglio. Photos by Andrea Smith.
T

he alpine valley of Val Bregaglia, like the Mera river which flows through it, begins in Switzerland and finishes in Italy. The border cuts across the valley and right through the town of Castasegna, the start of my hike today.

It’s a warm summer’s morning when the hiking association’s hired bus heads north from Milan’s central train station, past Lecco and Lake Como towards Switzerland. At Chiavenna it turns right into the Val Bregaglia and follows the signs for San Moritz. At Castasegna the bus stops. It will wait for our return.

With Castasegna split in two, our first task is to cross the border. Outside the four-story guard quarters we find the imposing steel gate closed. We descend stairs to the nearby highway, pass the new checkpoint and ascend more stairs back into town. We are now on the other side of the gate in Switzerland.

We follow a road past the houses and huge chestnut trees to a footpath marked with yellow signs. We head for the village of Soglio (1,090 meters). It’s an easy 500 meter climb on a well-kept trail under shady woods.

Above the baite of Plazza, we turn left to visit the delightful waterfalls of Caroggia. Then we return to the original path on the right. We pass a condominium of bee hives built into a hillside. We reach a level dirt road and supply lift as we approach Soglio. A farmer with an old-fashioned wooden rake works outside a slate-roofed house of stone and weathered wood. I expect Heidi to run out and greet us.

The village of Soglio is renowned for its panoramic views and multitude of trails. Palazzo Salis, built in 1630 as the seat of the Von Salis family, is now a charming hotel still owned by the same family.

The hotel could be a setting in an Anita Brookner novel — a discreet hideaway for refuge or convalescence. Its garden is an odd mix of low, Italian-style hedges demarcating zones to eat, play or lounge while two 150-year-old American sequoia trees shade roses and quiet-colored flowers more typical in an English country garden. Fascinated by sequoias growing in the Alps, our group of 20 Italian hikers run willy-nilly through the tiny areas and disrupt the tranquility of the English and German-speaking guests.

We visit the cobbled lanes of the village and a lookout with a view of Val Bregaglia and Val Bondasco dominated by the peaks of Pizzo Badile, Pizzo Cengalo and the Sciore mountain range. With the noonday sun beating down, we scout for a shady place to picnic but all the signs say “Non calpestare i campi” — don’t trample the fields. Our group follows the paved footpath until out of sight and then calpestare the grass to sit under some trees.

Afterwards, some of us wander back to Soglio for espressos. We run into Japanese tourists following their guide’s flag. They have just come up the narrow road by minibus to admire the famous view. With the snap of a photo, they reboard and go.

Instead we leave by taking a trail on the right through a field to a wood. We descend to a promontory with another spectacular view of snow-streaked mountains overlooking the towns of Promontogno and Bondo. Further down the valley are the towns of Stampa, home of the Giacometti family of painters and sculptor fame, and Maloggia, where the painter Giovanni Segantini lived. These mountain views inspired many of his works exhibited in the Segantini Museum in nearby Saint Moritz.

The well-maintained path tumbles down beside a cliff edge. We navigate over a rock slide for about 100 meters. We arrive at Promontogno, then Bondo. There’s hardly a soul about. Someone comments that in Italy we would see people eating watermelons in their gardens on such a hot day. We do find some life in a beer garden. The voices of the few Swiss out playing cards echo Lombardy dialect.

We visit the simple church. It is Protestant like all the churches in the Swiss part of Val Bragaglia. The population adhered to the reforms of 1522 after having joined the canton of Grigioni, allied with the Swiss Confederation, in 1498. Instead, the Catholic Italian part of the valley has had a turbulent history. It passed from the Ducato of Milan to the Grigioni canton in 1512 but from 1797, it ricocheted through Napoleonic, Austrian, Sardinian and Italian reigns.

From Bondo, where mountain climbers can register before tackling Pizzo Badile, we take the Via Bregaglia towards Castasegna. It’s a flat, dirt road under ancient trees running parallel to the Mera river on the valley floor — a good place to stroll in autumn for the colors and chestnuts.

We repeat the stairs routine through customs to the Italian side. The Guardia di Finanza and Carabinieri in their uniforms are more handsome than their Swiss colleagues. The local bar is alive with late afternoon customers.

On the bus back, I notice the Italian part of the valley looks more run-down. But people are outside. A grandmother sits on her front porch eating watermelon, while children play in the yard. I think we hikers could calpestare i campi here.

— For more information, investigate Montagna Incantata; Swizterland is yours; Via Bregaglia; My Switzerland; Bregaglia Swizterland and Palazzo Salis.