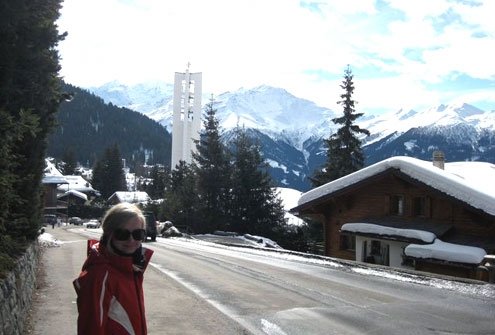 The author in Verbier. Photos by Ingrid Williams.
I

’ve always loved the idea of the settimana Bianca. Every year, I listen to friends retell stories about the snow-covered mountain chalets, multi-course lunches at cozy rifugi, and long snowshoe hikes followed by even longer soaks in a steaming hot tub. The skiing often seems beside the point, a casual aside during a week of alpine indulgences.

But to a girl who learned to ski in the Rockies, struggling to keep up with her much older, practically pro cousins as they swept down the steepest and bumpiest black diamond runs, skiing is exactly the point of a ski vacation, no matter how buono the pasta might be inside the lodge. For two years, my husband, Dave, and I didn’t descend on the Dolomites in the grand Italian tradition. He doesn’t ski (well), so a weeklong ski vacation wasn’t at the top of his must-do travel list, and I had yet to find an affable ski buddy that was willing to venture beyond the bunny slope. So that’s where we were when the invitation arrived.

An old college friend of Dave’s was organizing a group ski trip to his family’s place in Verbier and wanted to see if we would like to come along. Verbier is a small village in the Swiss Alps known for its excellent off-piste skiing, as well as for the well-heeled crowd that flocks there each winter. It is the serious skier’s St. Moritz. So while Dave started describing Verbier’s 10-kilometer-long tobogganing run, all I could think was that I would finally get to take a proper settimana Bianca — even if it would be en français.

After arriving in Verbier late on an icy-cold Saturday night, we spent Sunday testing out the slopes. Since we didn’t have ski passes yet, we dragged a couple of plastic sleds onto the bus and rode to the top of a hill. Growing up, I would take my wooden sled to the hill nearby a local monastery on the two or three days each year when central New Jersey got more than an inch of snow. Stepping off the bus at the top of the Carrefour ski slope, I looked down on a hill twice as steep as the dinky monastery hill and ten times as long, maybe more. We couldn’t see the bottom. Dave looked uneasily at the signs showing a sled crossed out with a big red line. What we were about to do was clearly not allowed. But a little kid, maybe five or six years old, plunked his sled down a few meters away and pushed himself, yipping with joy, over the edge. Dave gave me an “If that kid can do it…” look.

A few seconds later, I was flying past snowboarders and yanking the sled’s brake as hard as I could. Digging my heels into the snow, a pile of powder flew into my eyes. I was beginning to understand why Verbier’s safety officials might not want wayward sledders on the same slopes as skiers and snowboarders. Dave had encountered some steering issues and arrived at the bottom of the slope with snow in his boots, up his shirt, down his pants and crusted into his hair. With a grin on his face, he asked, “Wanna go again?” And so we did.

The next day was a ski day and I headed to the top of the mountain with four new friends. The first run of the day was perfect — steep but not dizzyingly so. We carved through fresh powder before dipping into the woods for a lazy glide back to the lift. In the gondola, our amiable host doled out slices of blood orange and pieces of Swiss chocolate, which were gobbled up with gusto. Later in the morning, we tackled a tough bump run with views of the village below, just a tiny speckle between the colossal, snow-covered mountains.

In serious-skier style, lunch consisted of pre-packed sandwiches from someone’s backpack and a cup of hot chocolate. But this was no Swiss Miss and turkey — we drank real Swiss chocolate melted in warm, foamy milk and sandwiches of crusty French bread, roasted chicken, and spicy mustard. Still sweaty from the last run, we sat outside on a picnic bench, turning our faces to the sun as it peeked through the clouds for the first time all day. My legs ached from exertion and my stomach hurt from laughter, but soon we were all ready for more.

That night, there were ten rosy-cheeked faces sitting around the dinner table, digging into bubbling pans of tartiflette savoyarde. Bottles of wine crisscrossed the table, bread and salad were passed back and forth, and every mouth was quiet while the first bites of the wonderfully comforting, creamy, cheesy potatoes with speck found their way to our stomachs. After cheese and dessert — gooey coconut cookies drizzled with chocolate — whiskey was poured and plans were made for an ice skating outing later that week.

The last time I had worn ice skates, I was still in elementary school. I talked a big game about being an excellent skater. But as it turns out, skating is not like riding a bike and I took a few falls before finding my feet. Since we were the only ones out on the ice, someone had the idea to try curling. We’d been watching the Olympics and had a general idea of the rules of the game. No one seemed bothered by the fact that we had neither curling stones nor a bull’s-eye at which to slide them. A plastic disc materialized, teams were chosen and shoes filled in for the stones. An hour later, when a crew of hockey players showed up, we were finally forced off the ice.

After an afternoon movie and a catnap, we all suited up in snow gear before going out to dinner. Dragging skis, poles, boots and sleds behind us, we piled into the bus headed for Carrefour. At the top of the no-sledding-allowed run, there’s also a fantastically cozy restaurant, Le Carrefour. In the warmly lit, wood-paneled dining room, we had a fondue feast with bread, potatoes and grilled meats. Despite the excess, everyone had room for dessert — a parade of crème brûlée and molten chocolate cake. By the time we were finished, the busses had stopped running and there was only one way back to the chalet: down the hill on our skis and sleds. But for this, we were prepared, of course. On the bus ride up, the snow had been coming down in fat flakes the size of golf balls. When we were ready to ride down, however, the ground was covered but the sky was clear.

Torches were lit against the dark, giggles rang out as sleds tumbled into piles of snow, and halfway down we stopped to take in the twinkling view of the town below. But there was a surprise in store: a dazzling shower of fireworks — blue, red and silver lighting up the night sky. Cameras flashed and we applauded our host who had just created a moment no one would soon forget. A few minutes later, we were back inside, pulling off wet clothes and settling in for a competitive game of tiddlywinks.

This trip was, for me, a rare journey with friends. I usually travel with just one friend — Dave — since groups are both difficult to organize and stressful to manage. But crowded around the table with new friends, passing cookie plates, champagne bottles and tiddlywinks chips, I realized that sometimes that extra effort is worth it. Tomorrow we would scatter to London, Tokyo, Washington, Paris and Italy, but tonight we’d eat one more cookie, have one more drink, crack one more joke and play just one more game of tiddlywinks.

From Geneva International Airport, the drive to Verbier takes about two hours. Baboo and easyjet fly to Geneva from a number of Italian cities, including Milan, Rome and Naples. From northern Italy, the train is a faster, more comfortable alternative. The trip takes about three-and-a-half hours from Milan, but check the timetables on the Swiss SBB rail site, since Trenitalia’s website is unreliable for international destinations.

Once in Verbier, the entire town is easily navigated on foot. Those lugging skis, however, will appreciate the free busses that run all around the village on a regular basis throughout the day.