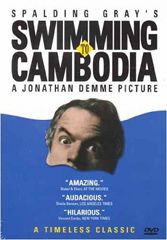 Spalding Gray had a minor part in the “The Killing Fields,” Roland Joffé’s acclaimed 1984 film about New York Times correspondent Sydney Schanberg and the Khmer Rouge’s genocidal takeover of Cambodia. Gray transformed the experience into an 85-minute stream-of-consciousness monologue that director Jonathan Demme filmed and trimmed.

Gray, in his New England “drawl,” weaves comic-ironic stories about Thailand (where “The Killing Fields” was filmed), culture shock, soured relationships, and filmmaking venality into a deeply affecting self-portrait. Some critics insist all this was best left to the stage. That short-shrifts Gray (who was stricken by depression and committed suicide in 2004); his camera-talk honors an exceptionally idiosyncratic intellect and, more important, the primacy of well-spoken words.