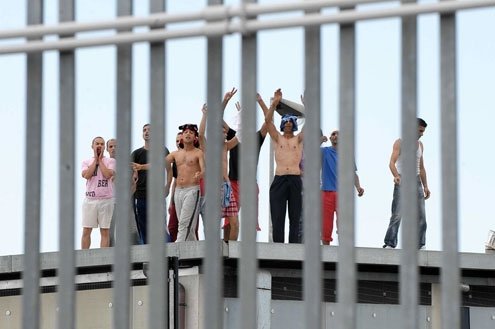 Cie di Ponte Galeria (C.I.E.) is Rome's center for the identification and deportation of immigrants.
O

nce a day throughout the summer I’d hear the sound of running footsteps on the cobblestone street below my window. Plastic bags rustled and smacked up against the bodies of the runners.

I’d look down from my window and see groups of winded Bangladeshi vendors who had managed to escape the local police and carabinieri who patrol Rome’s Via Fori Imperiali, the major artery near the city’s most visited Roman monuments. The Bangladeshis held stacks of summer hats and plastic bags full of sun umbrellas. Some were glued to cell phones, their voices throaty from exertion. They often looked pleased as they collected themselves in plain sight. They’d shaken the police. But they were also disappointed: their day’s work of selling to tourists was done.

If they’d been caught, the hats and sun umbrellas would have been confiscated. But that’s the best-case scenario. Worst case, lacking Italian documents, the vendors would have been arrested and hauled to either Tor Cervara (an immigration office that doubles as a jail) or Cie di Ponte Galeria (the center for identification and deportation of immigrants, basically another jail).

One first-hand account about Tor Cervara — based on someone who saw for himself — involved Africans and Bangladeshis piled into a single cell and called “animals,” with medical care hard to get or refused altogether. Many second-hand accounts cite beatings and police brutality. At Ponte Galeria in 2013, 13 immigrants, fed up with the conditions, used wire to sew their mouths shut in protest.

No one can ignore the ever-increasing numbers of immigrants — estimated at more than 100,000 so far in 2014 — who reach Italy from across southern Mediterranean. Colle Oppio, Rome’s immigrant neighborhood, is swelling visibly. A few years ago, the only sign that people lived in the park near the Coliseum were clothes drying on fences and discarded cardboard used as beds. Now, in a fenced-off area of the Baths of Trajan, trash piles up daily (city trucks appear to ignore it) and parts of the park itself have been transformed into a sort of living room. Surrounded by Roman ruins, the men who live there have nowhere else to go.

Rome’s short-term solution seems to hinge on brute force and jail, only making things worse. Refugee facilities are overcrowded. The paperwork needed for deportation or to get refugee status is a nightmare. The arrested may languish in jail for years.

It’s a vicious cycle. The Bangladeshis who are detained and released or escape capture return to selling their hats and umbrellas. Africans peddling purses, after they’re dispersed, inevitably go back to their old haunts.

Boatloads of refugees fleeing poverty and violence continue boarding rickety vessels and risking their lives in the hopes of finding better prospects. It is not a political movement but a human one.

Over the years, I’ve sensed the close-minded and change-resistant side of Italian society. Divorce was legalized only in the 1970s — and even then over fierce Catholic Church objections. The Vatican has only recently begun paying taxes on non-Vatican property.

When a friend, a white French woman, sought vaccinations at the national health agency (ASL) a female employee derided her for not being an Italian national. Why, the woman muttered, should Italy be responsible for giving her vaccinations? That my friend was a EU national who was paying for the treatment didn’t matter. Things deteriorated when her non-white boyfriend, also a EU passport holder, stepped up for his own vaccines. Some visiting African-American women, weary of racism, have left Italy behind.

But not every city is Rome.

I recently visited Salento in Puglia (the heel of the Italian boot), which also hosts a large African and Bangladeshi population — no surprise since Puglia juts toward Africa. The cost of living is lower and tourists are plentiful in August.

In Lecce, Salento’s most populous city, I saw no trace of the homeless population that is highly visible in Rome. Africans drove cars and worked in customer service jobs, a rarity in the capital. Based on Lecce, Italy seem fully capable of integrating Africans, Bangladeshis and others if it chooses to.

Italy is a small country. There’s no American-style sprawl. Soon, it will have no choice but to change. Thousands of immigrant children are being born here. They’re no longer African or Bangladeshi but Italian.

Rome already has an active second-generation Filipino and Chinese population. Filipino-Italians and Chinese-Italians run stores and drive cabs. Congolese-born Cécile Kyenge became the country’s first black minister under former Prime Minister Enrico Letta. She faced ferocious abuse, but the precedent was set. The Italian national soccer team recently broke with its all-white past when it included Ghanaian-Italian Mario Ballotelli, who shot to stardom.

The world is a blender whose key word is dignity, a word Italy badly needs to get around to embracing.