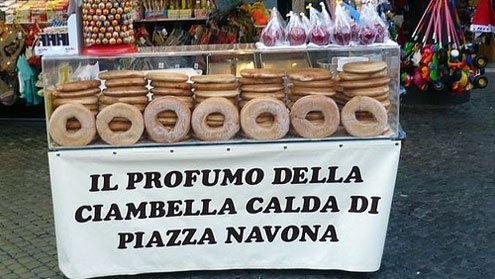 Big one or small?
T

he piazza sparkled with stalls toting candy, toys, holiday decorations, and Christmas cheer. Italian families flocked through, smiling and buying; the carousel spun. Just a few hours earlier, the pope had opened the season with his blessing and wreath-laying at the Spanish Steps. The holiday spirit was all around. And I was standing with a Christmas gift I didn’t want: a ciambella — an Italian donut — the size of my head.

The vendor stood on the other side of the stall, plastic glove still on, smirk steady on his face. “But I didn’t ask for the big size,” I was protesting, gesturing toward myself in an attempt at proof — did this five-foot-three-inch girl really want a pastry that could feed a small family for a week?

“I wanted the one that’s listed right here. The one I said. And that I pointed to when I ordered. And that I’ve already paid for. Ciambella e nutella. €2.50.”

“You didn’t say what size you wanted,” the ciambella-seller barked.

Ten minutes ago, I’d been strolling through Piazza Navona, soaking up the holiday cheer, when three things hit me: my stomach was grumbling, it would take at least a half an hour to get home, and, what the heck, the ciambelle looked good.

Then everything had gone wrong. Apparently there had been a miscommunication over what exactly what I’d ordered. But I was wary. Had the vendor been trying to scam me into paying for a large one from the start? Even if it had been an honest mistake, I’d never heard of someone telling a paying customer they had to hand over more for something they hadn’t asked for — or else get nothing at all.

“Forget it,” I muttered, and turned to go.

No sooner did I turn around than I realized that my 2.50 — which I had, trustingly, put on the counter as soon as I’d ordered — was still sitting there. I spun on my heel. The coins already had disappeared. “Hey!” I said to my foe, who was busy baking up his next order. “Where’s my money?”

“What? You can’t just do that — you didn’t give me anything for it. Either make me a small ciambella, or give me the money back!”

“I’m coming back with the police,” I blurted out, more upset over 2.50 than I would have thought possible.

The vendor shrugged. “You do that,” he said.

His smirk, and the nonchalant way he returned to making the next overpriced piece of fried dough for the next smiling customer, made my blood boil hotter than the oil he was using. He suddenly represented every person in Rome who ever had tried to overcharge me, or those I was with, or those I knew, because they assumed they could get away with it.

I thought of every tourist who had ever told me about the €35 they’d paid for a cab ride from the train station to their hotel 10 minutes away, or about dinners that had seemed cheap on the menu but later mysteriously doubled in price when the bill came.

I thought back to when my father and I had first come to Rome — I was just 14 — and how we’d been suckered into a pricy photograph with a “gladiator” at the Coliseum, not to mention into a bottle of water that somehow wound up costing $10.

And even though it didn’t happen all the time, or nearly as often as it used to, it happened enough to make it my top pet peeve about a city I otherwise loved.

So, as I turned to go for the second time, I realized I had a choice. I’d only lost €2.50. It’s not like I really needed a fried pastry anyway, whether it was as big as my head or not. I could be the bigger person, walk away, and try to recapture some of the cheer that everyone else seemed to be enjoying.

Or I could get the police.

Five minutes later, I returned with three sauntering carabinieri (they were bored and more than happy to accompany me). The vendor glowered. He told them I’d asked him for a big pastry. I said that wasn’t true. He argued. I argued. We waved our hands around. The carabinieri mediated, but only slightly. A crowd of Italians watched, curious.

I realized I was being ridiculous. I also realized that, if this guy thought he was going to overcharge a foreigner, he’d picked one who was a little more Italian about the whole thing than he might have expected — as in, very willing to look ridiculous to make a point.

Finally, the vendor thrust the ciambellone across the counter at me. “Take it, forget about the 1.50,” he said.

I didn’t know if my little stand would make a difference to any other potential “victims,” but I did know one thing: Victory had never tasted sweeter. Literally.