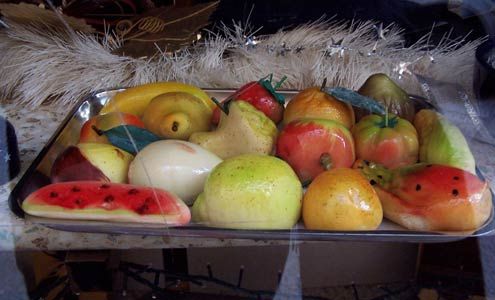 icily is much ado about sweets. Driving from Palermo on a trip across the island we lucked into cities gearing up to celebrate patron saints — Sant’ Agata in Catania and Santa Lucia on Ortygia. Festivities seem to beckon the island’s sweet tooth. Multiform cassate, cannoli and marzipan fill pastry store windows. There are also quince, fichi di India, and thick mostarde, a paste cooked in clay molds and shaped to resemble religious icons. Add sculpted breads and innumerable fried sweets and you can forget dieting. Even the tomato sauce tastes sweet.

Arab and Spanish influences make sugar into a culinary wildcard. It’s often mixed with nuts, spices, and meats. In Modica, for example, you’ll find ‘mmphignata, which are empanadas filled with chocolate, cinnamon and meat — similar to the mole from Oaxaca.

Almonds, meanwhile, are used in the making of marzipan while its paste goes into marzipan fruit. There’s also latte di mandorle (almond milk), a refreshing warm-weather drink. At Ortygia’s Trattoria Mariano we found a pasta dish that substituted toasted almonds for Parmesan. Trapani’s famed red pesto supplements basil and tomatoes with… guess what? Toasted almonds of course. The result is rich enough to slather over bread. Pistachios, in turn, find their way into cannoli, cover cakes, infused ice cream, and rice arancini (where they coexist with veal ragù and a light béchamel sauce).

Sicily is a nibble-and-nosh heaven. Start with the local market and then head for bakeries and bread shops. Stop for coffee and pastry (baked and fried ricotta). You’ll need the rush before entering street markets that assault the senses.

Catania‘s has stand after stand of fresh fish, some still swimming. Meats hang from hooks or lie on cutting boards. In baskets are mounds of oversized purple-tinged cauliflowers and dark green broccoli. Hot tripe (in cauldrons) and blood sausages are cut to order and served on wood. Fresh sea urchins with lemon are dished out raw for the brave. Blood oranges, breads, and spices are heaped in hills. The sound of butchers and fish-mongerers is its own soundtrack. In the food annex of Catania’s huge Sunday flea market I even found a torrone (almond brittle) maker, his copper pot caramelizing the sugar before he turned to work the brittle with a spatula and cleaver.

As we drove to Ragusa Ibla from Siracusa (pausing in Modica and Noto) we passed orchards of carob trees side-by-side with secular olive trees. Chocolaty carob played an important part in the Sicilian sweets industry. Carob seeds were used in gold and gem transactions to determine “carat” weight. Today they’re inserted into candy and poor man’s chocolate. Fine flour from the crushed seeds is mixed with almond flour to make marzipan. In combination with all-purpose flour it’s used to produce gnocchi.

If you’re in Modica, don’t miss Antica Dolceria Bonajuto, where Franco Bonajuto preserves chocolate-making techniques transferred from Mexico to Spain to Sicily. Cocoa beans are crushed with sugar, leaving the crystals whole. This gives the chocolate a rustic feel and flavor. The traditional chocolate is then flavored with cinnamon. A new line of flavors includes orange, sea salt, and chili.

Crossing the island, we stopped for lunch in Chiaramonte Gulfi near Ragusa. Here, pork is king: risotto with ragù, ravioli with pork sauce and grilled sausage, stuffed pork chops. The palate cleanser was a salad of oranges cut into chunks and served with parsley, chili pepper flakes and olive oil.

But Palermo stole my heart. It’s a tough town. Torn apart by World War II, the city wasn’t so much rebuilt as recreated. The old section is still held together with scaffolding. Abandoned buildings abut newer stores and restaurants. Traffic is intense and the noise level high.

Of Palermo’s main markets, Capo is closer to the “new” part of town while Ballerò is in the older Albergheria district. The Vucciria market (from the French word for butcher) near the San Domenico church is my favorite. Walk through it at night (I dare you!) and you’ll find simmering grills and pots of octopus boiling. Line up and join the locals. I can do without the milza (spleen sandwiches) but I love the stigghiole, grilled rabbit intestines wrapped around fresh green onions. My home version consists of wrapping onions in prosciutto and cooking them stovetop.

What we missed this time around we’ve planned to visit next year, festivals included. Here’s our tentative list:

— Agrigento’s Almond Blossom Festival in the first week of February.

Drain tomatoes (save liquid) and chop.

Place toasted almonds and salt in a blender. Pulse quickly to chop.

Blend again until a thick puree is formed.

If mixture seems to thick, thin with some liquid from tomatoes.

I soak mine in hot vinegar till soft and then season with garlic, olive oil and chili peppers.

I first had these at Maria Grammatica’s pastry shop in Erice, in the hills outside Trapani. I reduced the sugar so they aren’t too sweet.

Bring 2 tbs water to boil with 1/4 cup of the granulated sugar.

Mix the almond flour with the remaining 1/2 cup of sugar.

Add the sugar water and a few drops of green food coloring to the dry mixture.

Knead the dough on a clean work surface until smooth.

Wet your hands to make this easier.

Break off small “olive-size” pieces of the dough.

Roll between your palms to form and then roll the olives in the sugar to cover well.

Let sit for at least a day to firm up.