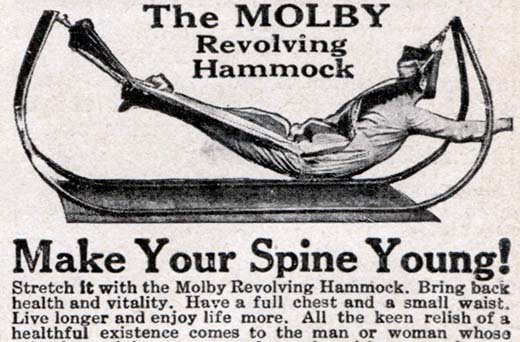 Only the very best machines…
F

or those of you who missed it (how could you?), here’s the complete transcript of Braxton Pace’s inspiring acceptance speech after receiving the Best Gym Designer, which everyone in the fictional workout world is talking about. Never heard of Fitness Forever or the Gym Designer Academy? Read and learn. Or move to Los Angeles.

“Ladies and gentlemen of the Gym Designer Academy, I am humbled and honored to have been selected by you as Best Gym Designer. As I look at my rivals I feel like they all deserved to win, and it’s hard to imagine how I could have stood out among such qualified peers. Even calling them peers is unreal. When they asked me to design Fitness Forever, I already felt I had reached the apex of my career. What aspiring designer doesn’t grow up dreaming that one day they’ll work on a gym where so many celebrities have gotten into shape to play a superhero or gotten back into shape after gaining weight for a role?

“I remember when I first walked into the space. Where some saw rough, exposed brick, I saw the wall a man would lean against as he flirted with the woman trying to ignore him and keep count of how many squats she’d done so far. The floors might have satisfied an untrained eye in their apparent smooth flatness, but my mind conjured up images of the dents that would soon form as people wearing shirts reading ‘Deadlifts and Chill’ would drop their too-heavy weight after a single shoulder press and watch it clang to stillness. And the wall of mirrors would soon be reflecting the completely flexed figures of gym addicts taking selfies to post with the simple but eloquent caption reading: ‘Gains.’

“People often ask me how I came up with my floor plan: ‘Braxton, what were you thinking?’ Well, now that my competitors can’t steal the glory from my idea [pause [for laughter], I can tell you. The open space at Fitness Forever is heavily inspired by the Norwegian fjords. “Scandinavian style is so popular these days, I thought to myself: ‘Where else can we draw inspiration from them?’ I wanted the gym patrons to feel the intricate shoreline of the north as they wove through the machines. I spent nights hunched over my computer looking for equipment that had bizarre extensions that would jut out at awkward angles and I made a very conscious effort to place them next to others that would complement them.

“I’d like to think that this not only encourages people to be aware of space instead of just moving freely and easily. I hope it promotes a dance of sorts, a necessary twisting and turning that encourages our tired athletes to get from one side of the gym to the other where the water coolers are. 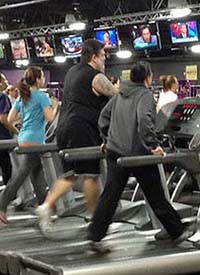 The marvelous friction between intense rower and annoyed meditator only adds to the high energy in the gym.

“Of course, I couldn’t have done it without the help of the patrons. When I put the rowing machines next to the wind-down area, I could only hope that someone would be using them just as a fellow athlete tried to relax after a heavy workout. But I could never have anticipated that someone would actually be rowing with terrible technique while someone else tried to meditate. Certain things in life are just too beautiful to plan. The marvelous friction between the intense rower and the annoyed meditator only adds to the high energy in the gym.

“I must also thank all the gym rats that grunt loudly or release any form of liberating expletive at will. I hoped, secretly, that this would happen since I built the gym to have great resonance and to encourage sound to travel. The few-and-far between disinfectant stations I added, of course, to discourage cleaning after yourself, instead allowing for the building of a sense of shared sweat, and community.

“Nothing happened by chance: From choosing to show murder mystery shows on the TVs to encourage panicked treadmill running to the installing of windows that don’t open to promote sweat-induced humidity, this gym is an example of the greatness that can human cooperation can forge. We should remember the incredible things that can happen when we all have a common goal and add sweat to the mix. From the bottom of my heart, thank you to the Academy and to all those that helped get me here. And now, I’ll pull a Frank Sinatra and walk home with my award [pause for laughter, wave, then leave the stage].”