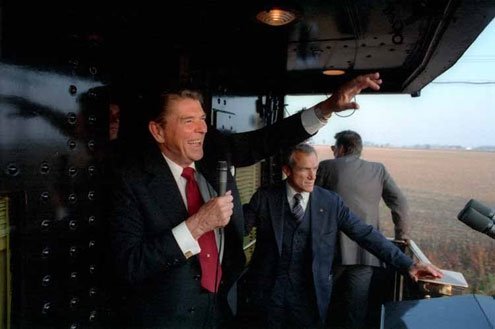 President Ronald Reagan on a whistle stop train tour in 1984. He defeated Walter Mondale in a landslide.
T

he final days of the U.S. presidential campaign helps illustrate just how America-watching plays out in Italy and in other countries where politics and politicians are generally disengaged from the fleshier side of democracy. The watching, which includes doses of envy and contempt, has nothing whatever to do with the debate over U.S. global reach, or with challenger Mitt Romney’s assertion that 21st-century America has somehow surrendered the clout it boasted during the bipolar Cold War. In fact, it hardly concerns policies, or even who wins or loses.

What it shows instead is a kind of awe toward the near-crazy idealism represented by eleventh hour presidential stumping. Here are America’s two White House contenders spending long days and nights in the small cities and towns of states that will likely “swing” the vote’s outcome. To win, they must each wade into the loud scrum that is the American heartland.

In the railroad era, these presidential callings were called whistle stop tours, with candidates chugging city-to-city making speeches from the train’s back car. Slicker times may have killed off trains, but the need for boisterous, sweaty contact endures. Americans want to see their candidates up close and hard at work. Presence matters as proof. Candidates locked in a tight race rarely leave the outcome to party machinery.

Contrast that to parliamentary Italy, where barnstorming is seen as messy and uncouth. Once a party anoints its candidate (a process now left to copy-cat primaries), the next step is the compiling of names, not platforms, an insider game arguably the least democratic part of any non-executive system. Yes, candidates pop up at big-city rallies, but most appearances are on high profile TV talk shows. Surrogates and stand-ins are the norm. There is no personal or political urgency to make direct contact with the national electorate.

Italy’s fleshiest campaigning may have come in the early 1990s, when entrepreneur Silvio Berlusconi formed the populist Forza Italia Party and dashed around the country pitching his grinning persona. Northern nationalist Umberto Bossi followed suit, but mostly on his own turf. Entertainer Beppe Grillo, the head of the new Five Points movement, has spent much of the last year barnstorming, but Grillo is a trained comedian who toured long before he became involved in politics. Incumbent (but unelected) Prime Minister Mario Monti feels no need to persuade anyone, let alone pull up his shirtsleeves. He’s an academic economist more at home with business groups than among flash mobs. He speaks sincerely but in the abstract.

In truth, Italy just isn’t a pull-up-your-shirtsleeves kind of place. A mixture of class-consciousness, deference, and suspicion toward authority keep the two sides distant. Few non-specialists even know what the Italian version of the document says. No one has yet made an “of the people, by the people, for the people” address.

This alienating detachment, in which parties and lawmakers are seen as little more than entitled entities, only accentuates the folksy conduct of American candidates, making their behavior, and that of the citizenry, entirely surreal or deeply inspirational, sometimes both.

Auto racing affords an improbable example of this Euro-American gap. Europe’s Formula One is wealthy and elitist, staged in chic capitals that host amazing cars as well as a coterie of drivers and their Hollywood-style entourages. The celebrity names are Ferrari, Mercedes, McLaren. Fans can watch the races, and do, but never get close to the cars or the drivers, let alone being able to afford the brand name. Then there’s American stock car racing, NASCAR, a happily unglamorous sport that makes a great deal available up close, including unfussy cars and drawling drivers. Aloof Formula One caters to the nobility of racing, NASCAR to rambunctious fans.

The American campaign trail is fan-driven, which makes it democratically dynamic. As contrived (and repetitive) as the speech might be, the candidate still makes it in a shopping center, a coffee shop, a mall, a school: The candidate, he or she, comes to you, the voter.

Berlusconi’s core support withstood the scandals around him in part because he’d taken more time than others to familiarize himself with the patois of the country’s non-elite. To the annoyance of more cultured classes, he whistle-stopped in his own way, promoting himself as vulgar but accessible. His actual accessibility was an illusion, but the two-decade strategy had an American side, as did his media manipulation.

With the Italian political scene now reduced to a semi-wasteland of unconvincing figures, none of whom, minus entertainer Grillo, would ever think to perspire unduly, let alone travel north to south and back, the country is left instead with borrowed images of a black president and a Mormon businessman running around the legendary United States of America shaking hands and kissing babies, an alien but stirring vision no one can seem to fully understand, let alone do without.