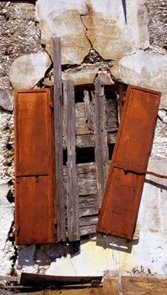 Check out the property...
I

n these cheerless times, when pensions and life savings are being wiped off the slate at the blip of a screen, I have my own little thrift tip to offer, one which, I am glad to say, is considerably more enjoyable than turning the cuffs on shirtsleeves or sharing bathwater.

I’m talking about home-swapping, a clever ruse that lets you take a holiday in someone else’s house or apartment while you hand over the keys to yours. Over the years, we have been to a number of places, staying in homes we could never have dreamt of in normal circumstances.

The beauty of home exchanging is that you don’t have to swap like for like, and I personally have a policy of trading up. We once landed a massive villa with a private beach in the Bahamas — fine apart from the resident shark in the water below. Another time we had a big house with a pool on an island off Puerto Rico. One memorable winter we skied in Gstaad, rubbing shoulders with arms dealers and shipping magnates — or at least we would have done, had we dared to go out more. An après-ski beer cost about the same as a three-course dinner in Italy and the place was heaving with dodgy Russians. That slight hiccup aside, our house swaps have filled me with an evangelical desire to convince others to do the same.

But it’s an uphill task in Italy, where many people seem to have a strong aversion to anyone entering the inner sanctum of their home.

I put the idea recently to an American friend living in Rome. She was enthusiastic, but her Italian husband hit the roof. “I’m not having strangers sleeping in my bed,” he ranted. “In any case, they could take everything we have!”

The Italian wife of another friend was even more horrified. “I don’t want to exchange anything,” she said heatedly. “I want my own house and my own husband.”

I pointed out that I was talking about home swapping, not wife swapping, but to no avail. I suppose it does take a certain leap of faith to let people take over your home, but I think the different reactions speak volumes about national characteristics. They say an Englishman’s home is his castle, but I suspect they really meant an Italian’s. Where else do you have to say “permesso” on the threshold, even after you have rung the bell and been invited to step inside?

The German homes up for exchange are invariably large, modern and have broadband in just about every room, but they also come with a battery of rules and regulations. And the French offers are of course by and large written up in French, so most people can’t understand. American home swappers don’t want guests to smoke, but they are generous in offering to trade huge houses with tiny apartments, so long as they are somewhere old and quaint.

As for the English, they make a bee-line for anywhere with sun, preferably where the drink is cheap too. In return, they will happily if somewhat absentmindedly leave the keys to their own homes, often complete with pets, though they may well not bother too much about leaving it spick and span for their guests. One of the best swaps I ever arranged was with a family in Devon, one of my favorite parts of England. This family was not only prepared to lend us their huge house with vast garden. They would also leave us their large four-wheel drive car, their yacht and their two horses.

When I picked the English family up at Ciampino airport the day before we were due to fly to the UK, they cheerfully piled into my old and battered Ford Escort, oblivious to the fact that they had brought one more child than they had told me about, causing me to do rapid mental gymnastics as I struggled to think how I could fit them all into our very small flat in Rome. In fact, the only slight downside of home swapping is that it can be less than restful. As you step into someone else’s home you realize you have the entire responsibility for anything that goes wrong and I am often seized by an uncharacteristic fit of cleanliness.

At the house in Devon, I spent Easter Day scrubbing the oven, though I don’t recall ever having cleaned my own. And as well as horses to feed and exercise, there were chickens, so I spent sleepless nights worrying about the fox that the owners had told me to watch out for. Then there was the goldfish, which belonged to one of their children and which, to my horror, was found floating face down in its bowl one morning. I drove into the nearest town and dragged the family around all the shops, looking for an identical fish so that the distraught child might not notice.

At the end of the day, we had only managed to find one that bore a slight resemblance, so I took it back, plucked up my courage and phoned the mother to break the bad news. “Oh I wish you hadn’t bothered,” she said breezily. “One of the children won that fish at a fair and it was rather a pain to keep. We were waiting for it to die.”