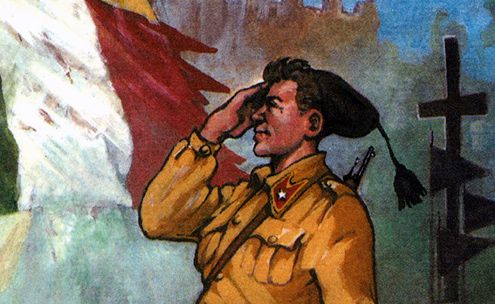 I’m in charge around here. There are only a few guys on duty tonight.
R

First (sober) meeting: A military base on the Via Casilina, the next day.

Eleonora slid the black cotton mask up her forehead and let the early afternoon light bathe her face. Her cell phone was calling out from somewhere across the room. She flung her legs out onto the cool linoleum floor, and tossing the smoky jeans and halter-top aside, she dug inside her handbag and caught it on the last ring.

“Pronto?” She flung herself heavily back into bed.

She struggled to remember his face. He was attractive, right? But then again, it was very dark, and she had been over-served.

“Do you remember me?”

She settled back into bed, drew the comforter up under her chin, and closed her eyes.

“Aren’t you tired?” The words scraped against her throat.

“No No! I need to wake up. I have some things to do.” That was a lie, but she often had difficulty justifying her Sunday morning lie-ins, and found herself inventing mini chores.

“Ok, good.” His eagerness to chat was refreshing. The world seemed so full of unenthusiastic men lately. “I’ve been here all day and I just thought, ‘why not call her?’”

“Where do you work exactly?” His voice was low and throaty, peppered with unexpected cadences and accompanied by nervous half-laughs, to which she responded chuckling, to put him at ease in the case that he was making a joke — although she had trouble understanding the thick Pugliese accent.

“I’m on the base. I’m in the military. Special services. It’s complicated to explain over the phone. Anyway I have to stay here all day and all night.”

“Yes. If you’re free later, you could come and keep me company.” She rolled the idea around in her head, considering the alternative — another heavy-headed night in front of the TV as her roommate and boyfriend giggled in the next room.

“Is it far?” She snaked her hand inside the covers and slid it along the inside of her thigh. She would need to shave her legs…

“There’s a bus from the station that stops right in front. It’s far, but not complicated.”

“What bus number?” She dove mentally through her closet. What to wear?

“105. Do you think you might come?” She twisted a finger through her smoke-scented curls. She would also have to wash her hair.

“Am I allowed to come on the base?”

“I’m in charge around here. There are only a few guys on duty tonight.”

“ I don’t know—” her conscience jabbed at her, projecting images of military gang assault, unlit streets, and barbed wire. “ I’ll ring you when I’m on my way.”

She flipped the phone shut and dashed under the shower. She scrubbed, exfoliated, shaved and rinsed, and doused herself in jasmine oil. As her hair dried, she picked through the wardrobe, tossing aside pants and tops of all colors, before calling a friend for advice. “Advice” was a skirt and no pantyhose. Just in case.

The bus pulled up along a long low building, sheltered by a tall cement wall. Taking a deep breath, she dialed. “I’m here.”

A gate opened and a man’s figure emerged in the distance. She was slow to advance, the thrill of adventure momentarily melting into fear. Her stomach knotted. It was dark, and she was about to enter a military base.

He gestured her forward. A Bordeaux beret crowned dark skin, an expertly-groomed goatee, and two slivers of sideburns which shot down sharp jaw-lines. His smile burst forth in a flash of white teeth, and a pair of bright eyes to match. He was lovely. A spicy musk arrived before he did, and as they kissed on the cheeks, she sighed, and felt a warm hand on her back as the gate slammed behind her. He led her to a locker room, where he pushed her against a wall. With one hand he held her steady, unzipping her long coat with the other. She stepped out of it obediently, shivering with the pleasure of his surprise attack. What followed is not fit to print. She went home with her panties in her purse, and they’ve been friends ever since.