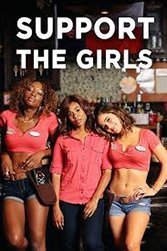 From the British “Kitchen Sin” movement of the 1950s and 60s, to modern auteurs like the Dardenne brothers, cinematic representation of the working class has often been reduced to dourness as a method for filmmakers to highlight the adverse conditions in which those on the lower rungs of society have been forced to live and work. While this kind of representation is of course hugely important and gritty social realism still has its essential place, a film like “Support the Girls,” which doesn’t shy away from the hardships of low-paid service work while still offering up hopefulness and fun, feels genuinely refreshing.

Set over the course of one long shift at a Midwestern U.S. sports bar, Andrew Bujalski’s film tracks the bar’s small team of scantily clad waitresses, anchored by their maternal manager Lisa (Regina King) as they do anything to endure the day’s barrage of rowdy, leering customers.

Of course, there’s a feminist perspective here — a group of women society has been taught to objectify must withstand an onslaught of masculinity — the film is really about a more universal fight: making the best of a bad situation.

There’s an unbreakable camaraderie amongst these girls, bred from a mutual understanding that none of them are where they want to be, but that life is too short to wallow in misery.

Lisa makes her way through the day radiating a quiet empathy, hoping her cheer will rub off on the world around her, even if inside she wants to scream. Meanwhile, energetic waitress Maci (Haley Lu Richardson) throws herself into everything she does, not holding back any of her emotions, even if that means falling in love with a customer.

Richardson is the real star here, using exaggerated body language to convey just how hard Maci works to exude optimism at all times. It’s a total contrast to her restrained, academic character in last year’s brilliant “Columbus” and confirms her as one of the most talented young actors working today.

The world of “Support the Girls” is one many will find depressingly familiar, yet it’s approached without condescension. The system may wear you down, but the sense of community is what helps you get through it. Keep fighting the system, but fight it together, and try to find a way to have a great time doing it.