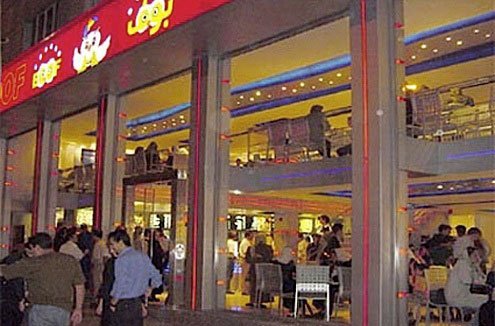 Iranians have creeping waistlines and a faddish and sad fascination with American junk food.
W

hat do Iranians and Italians have in common? Consonants aside, quite a lot — theocracy, bureaucracy, ice cream, bad driving, corruption, IKEA, botox, women dressed like crows and what my girlfriend contemptuously terms “exploding cat fashion.” By this she not only means the inexplicable fur blobs stuck haphazardly onto tawdry clothing but also spray-on jeans and weird transliterations of alien slogans — “I am breath of death” and “Hell’s Body Boys” being two of the more egregious examples of cottage-industry hip available on both Appio Nuovo and Vali-Asr, a thousand miles apart.

They also share a creeping waistline and a faddish and sad fascination with American junk food.

And a venerability of cuisine that stretches back a thousand years and crosses the continents of empire.

But here the différence — with a deferential nod to the French résistance gastronomique — ends. Of course one crucial point of departure is the fact that the fashion faux pas of Iranian women is under wraps. Not as shroud-like as Ershad (the Ministry of Islamic Guidance and Culture, or MIG) would like. But that may well change once the oft-touted Islamic Swimming Costume and Nouveau Chador are on the catwalk. Inside sources tell me the latter has lacy cuffs and a corrugated wimple but I daren’t enquire too closely in case I attract the unwelcome attention of the Basiji, or guardians of morality. They no longer whip you in the street (with a Koran tucked under the arm the gesture was more symbolic than substantive but it did humiliate) but their powers are growing and my brother doesn’t have a second passport.

Back to the kitchen.

Eating defines a nation’s identity far more than other single activity. One look at the growth of Slow Food and U.S. State Department warnings to stay away from expatriate McDonalds is proof of this. As are lurid backpacker tales of steaming monkey brains and fricassee of kitten paw told in the safety of the local trattoria or pub.

And of course a century after the end of empire, Margaret Thatcher’s Britain gave Mad Cow Disease to the world.

In a land of their own, teenagers of all countries see fast food as giving a defiant finger to a childhood bordered by the kitchen — and more so when it comes packaged as the epitome of all that is untrammeled and free. America on a plate, or rather in polystyrene and plastic wraps. For this reason fast food joints in Iran have been in the cross-hairs of the MIG as it closes in to protect the nation’s (fairly numerous) youf from moral decay and loose hijab. Along with cinemas and bookshops, the garishly-lit junk food ghettoes are said to be havens of un-Islamic behavior, filled with young people flirting with unrelated members of the opposite sex and stretching the boundaries of decorum to the limit with their figure hugging manteaux.

This latter is a tailored coat supposed to represent a reformist nod to modernity while providing suitable protection to susceptible men against the lure of a nubile adolescent female body. But in wealthy north Tehran, the manteaux have become so tight and so short that, were it not for the name (Heeva rather than Burger King) and the fact that everybody is smoking, you could be on Piazza della Repubblica or any other similar square in Italy, where fast food outlets have mushroomed.

And where gharbzadegi, to export and adapt the Persian expression which became the mantra for Iran’s 1979 revolution and which literally means west-toxication, or unhealthy fascination by America, has helped push obesity levels to one of the highest in Europe. Italy, according to the OECD in 2003, is home to the largest proportion of overweight children in Europe (36 percent of those aged between six and 10). In the EU as a whole, 20 percent of men and 25 percent of women were judged to be obese — a figure that creeps up to 33 percent in Il Paese. Three years later, judging by the proliferation of fast food outlets across the country and the move towards an agro-industrial economy, that number is likely to rise, despite efforts by the government to promote a range of healthy alternative livelihoods, including fasting once a week and doing exercise (the latter, of course, an unlikely option in the near absence of affordable civic amenities such as swimming pools or sports centers).

The Iranian government has taken similar measures, but in a rather more characteristically forceful manner, banning carbonated drinks and saturated fats from all state organizations. This may not help the low income groups, identified by the Ministry of Health as being most at risk from obesity in Iran, and nor will it lead to substantive changes in dietary patterns forged on the anvil of globalization and unemployment that is history’s gift to the revolutionary generation. And as in Rome, exercise is an elite luxury. Public swimming pools are banned to women, except at certain times (usually well into the working day, precluding all female breadwinners); jogging and cycling are permissible but in hijab, a suffocating experience in the summer; and exercise for girls at school is limited to prim Victorian body stretches accompanied by patriotic, child-bearing slogans.

A situation that has given rise to an export industry of plastic surgery and liposuction. But that is another story …

Iran, again like Italy, revels in proscriptions, and banning any substance is a surefire way of increasing its value in one of the many black markets that extend across the country. Once it was denim and shampoo, now ecstasy and liver-throbbing bootleg vodka. Perhaps the government should ban broccoli instead of Coke, whose distinctive and ubiquitous red and white labels are one of the many contradictions on the tables of the Axis of Evil?

— Koorosh is the assumed name of The American’s Iran correspondent.