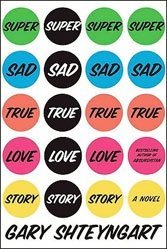 Forget the love story. The only thing “super sad” about Shteyngart’s third novel is the mega-media dystopia running its characters into the ground. China is now the Svengali behind the American economy. New York City is a slum. Communicating with one’s mouth is passé.

Instead, people “verbal” each other on their iPhone-like äppäräts. The last person on earth who still reads books (“printed bound media artifacts”) is Lenny Abramov.

A dweeby, Russian-American romantic pushing 40, he falls for much younger Korean-American Eunice Park after a drunken hookup on the last night of his business trip in Rome. Lenny can’t seem to detect Eunice’s indifference — there are cell phones that get better reception than he does. Eunice is a retail-obsessed child of the äppärät, sardonic and cruel, not interested in someone with a “gigantic heel spur that sticks out like he’s got a thumb glued to his foot.”

Insecure Lenny proceeds to pummel equally insecure Eunice with “verbals.” She gives in, reluctant, and joins him back in New York. Their relationship is one of mutual anxieties and self-doubt, not human beings.

Together, Lenny and Eunice are just as over-programmed as the hypermedia Shteyngart tries — and fails — to satirize. His predictions about the future are not provocative because much of what he predicts has already begun happening. They read like bells and whistles on a story that’s ordinary as a shoe.

What Shteyngart does understand is the disconnect between lover and beloved. It’s a classic kind of heartbreak, and the only aspect of the book that won’t be dated in a decade.