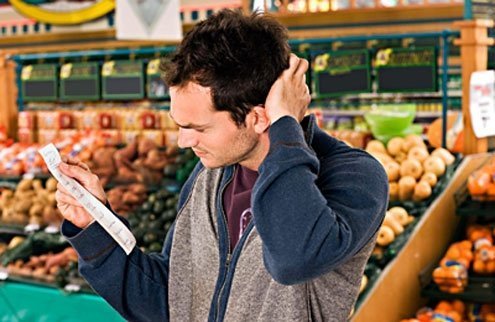 According to a new global study, men now make up 51 percent of all American grocery shoppers, a terrifying thought.
W

e once spent time in Wales after serendipitously finding a cottage next to a very large raspberry farm. In the morning, we’d amble over to the little shed where the raspberries were set out in individual boxes for the taking. One tin had a sign that read “leave your money here,” which is what we did, depositing a few shillings and hurrying back to have fresh raspberries and local clotted cream for breakfast. The clotted cream was wonderful but it was also all we had.

Our “milkman” was a very sweet local bloke who came round twice a week and presumably read our wish note pinned to the back door. But each time he visited he made up his own list. When we’d ask for cottage cheese, butter and a half pint of cream we’d instead get a quart of milk, a tub of margarine and a hunk of local cheese. Nothing we did could change his view regarding what he thought we really needed in the week ahead. I even made drawings of our desired items, hoping that might work, but no, there sat the clotted cream, butter, and milk in place of Stilton, plain half-and-half, and cottage cheese.

After a month of this, we learned that he couldn’t read well, even with glasses, so that he’d simply decided what we might like and left it. I loved the spirit of the story, and our time in Wales was made all the richer for our milkman, even if a month of clotted cream has its drawbacks.

I tell you this because it reminds me of the times I’ve sent males into the world of supermarkets with a list of items, usually while deep into the process of putting together lasagna ai carciofi, or writing an article, or drawing for a magazine, or simply being too busy to make the trip.

What came back? (The commentary is mine). Six rolls of trash bags (“You never know when they’ll run out at the store and then we won’t have any…”), two sacks of flour (okay, okay, I admit I can use that), a bunch of bananas for Godzilla, four kinds of bread yeast (yeast for brioche, yeast for pizza, yeast for home loaves, and so on), three jars of mayo (“It’s that American kind — we never find that anywhere!”), a week’s supply of Magnum ice cream (fine, a little indulgence is allowable — I have my own vices), a new broom head (“Ours looked a little ragged so I just grabbed this — it was on sale!”), half a kilo of clams for spaghetti alle vongole (wasn’t I making a lasagna? Hey, I’m flexible and it freezes really well), Purina Party Treats for the kitty (“I just thought these would make her really happy…”), batteries of all kinds (“Oh, we have enough batteries? I forgot to look, but you can always use batteries, right?”), and so on.

And this just one of the men I have been known to send out on errands. I admit that some of them have come back with a fairly reasonable facsimile of what was on the list. At least I think they have. Actually, that may have happened only once, and only because he was tight with a dime — “waste not, want not,” being the phrase he came home with. Fair enough, but no toilet paper?

And I’m not the only one who seems to have problems with getting men to stick to grocery list scripts (um, did I really ask for Chocolate Chocolate Chip Häagen Daz, frozen French fries and chili flavored peanuts?) A grocery list in the hands of an unaccompanied male, friends tell me, is like drying your hair in the bathtub. Shocking things can happen.

That said, I have to admit that one of the sexiest, most entertaining dates my mate and I have these days in southern France is a trip to the local grande surface, or superstore. We discuss ingredients and skip down the aisles marveling at the bounty we have to choose from. We anticipate our meals. It’s a grand excursion.

But that has less to do with shopping than being together, which is nice. Plus, togetherness means the male is accompanied and receives the proper guidance.

So, next time you feel compelled to send a man out solo to the supermarket to fetch ingredients consider this ingenious alternative: take-out.