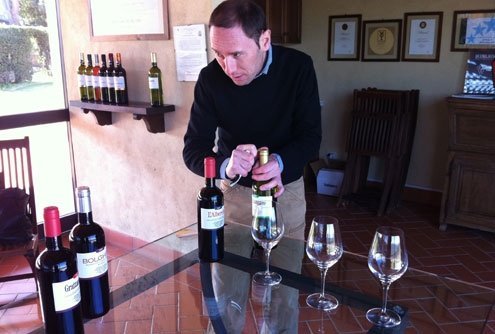 n a spring morning, I leaned against the rough stone wall of an ancient Etruscan tomb at Populonia on the southern Tuscan coast between Livorno and Grosseto. The hamlet’s necropolis is encircled by hills that slope gently toward a sea whose expanse of rippling blue water stretches to the horizon. The sun pops out from behind big fluffy clouds but all else is silent. In this once-bustling town, time stands still.

It’s a different story up the coast, near Bolgheri. Poor lands once used mostly as vast hunting reserves for aristocratic families have been transformed into productive vinyards. In 1948, the Incisa della Rochetta family began experimenting with planting Bordeaux grape varieties (cabernet sauvignon and cabernet franc) in the alluvial clay soil, using the flatlands and coastal hills, some of them rising 200-to-300 meters above the sea.

By the late 1960s, their wine, Sassicaia, became a bellwether for the “Super Tuscans” (top quality Tuscan wine made outside the normal DOC and DOCG denominations and labeled as IGT or Vino di Tavola). Now, the flats and the hills between Bolgheri and Castegneto Carducci are littered with vineyards. Wine regulators have created new DOC denominations. Though recent vintages of Sassicaia Bolgheri Superiore Tenuta San Guido DOC can be found for €60, older ones run more than €200.

The 8,650-acre Tenuta San Guido belongs to Piero Incesa della Rochetta and has the aristocratic feel of effortless elegance. You approach on a road lined with cypress trees and are invited to leave your car outside imposing gates. Inside is a stable with perfectly groomed thoroughbred horses. There’s also a modern techno-chic cantina. I tasted Sassicaia Tenuta San Guido Bolgheri Superiore DOC 2008 (€120), beautifully balanced, like silver candelabra passed down for generations on a dining room table set for 20 guests. Nothing is left to chance.

Next I drove along the steep dirt roads leading to Podere Grattamacco, which produced its first cabernet sauvignon, sangiovese, merlot blend in 1978. The tenuta, an estate, and the podere, more like a farm, are worlds apart. After parking my car near a rustic barn, I began looking for cantina, at which point Luca Marrone, the wiry and enthusiastic resident winemaker, popped out of nowhere like a mountain elf. “The fascination of this place,” he told me, “is that it’s hidden and you have to look hard to find it.” Agreed!

We stood on Grattamacco’s hilltop, looking down over the slope at the vineyards, which were beginning to sprout their first green shoots. I pulled my jacket close to brace against the force of the sea wind. “The only way we can have fully organic vineyards with all of humidity near the sea is thanks to the wind,” laughed Luca. “It’s windy 300 days a year here.”

“We pick all the grapes for each wine, regardless of variety, at the same time and ferment them together,” explained Luca. “We cannot change the wine by mixing various batches later in the cantina. Each of our wines really is made in the vineyard, dyed in the wool, a full expression of the grapes, the specific vineyard, and the vintage.”

Closer to the plains of the sea, Le Macchiole is famous for just the opposite. It uses 35 different vats to make stunning “monovarietals” in addition to its Le Macchiole Bolgheri Rosso. Founder, Eugenio Campolmi, was one of Bolgheri’s few non-aristocratic wine pioneer “locals.”

Abutting Grattamacco is Guado al Melo, a relatively new winery located completely underground. It was founded in 1999 by University of Milan viniculture professor Attilio Scienza and his son Michele, who moved south from the family’s native Trentino. In addition to the Guado al Melo Bolgheri Superiore DOC (2007; €30), I tried the Jassarte IGT (2006; €20), an unusual blend of syrah, alicante, malvasia nera and a mix of grapes from the Caucasus.

I ended my Etruscan swing with a three-hour lunch at the chic La Pineta’ restaurant at Marina di Bibbona, which from the outside looks like little more than a beach bar near a pine forest (La Pineta, Via dei Cavalleggeri Nord, 27. Marina di Bibbona. Tel. +39.0586.600.016). Chef Luciano Zazzeri produced a crudo salad, a colorful and textured array of raw seafood as delicate and beautiful to eat as it was to look at. Dish after dish appeared with wine pairings. For a minute, I thought I was seeing double, since the two suave servers, complete with ascots, are twins.