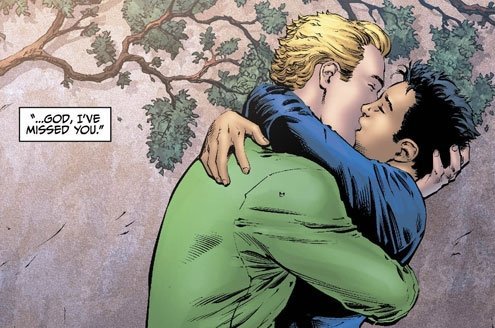 very summer, Alberto and I make our annual trek to the movies. I pick which one since there’s always the chance Alberto will sleep through most of it, leaving me to fill in the blanks.

I rule out theaters too far from home and films with less than three stars. Since we rarely go to movies, picking a good one matters. At the same time, I grew up in rural Ontario in the final days of drive-ins, so you can imagine my cultural roots.

After a short discussion we pass on the lesbian film (too far away), eliminate the French one (who knows when they end?), and agree on the new “The Amazing Spiderman,” which is much ado about 3D and spandex. Alberto grabs our personal 3D glasses (we’ve used them twice) and out we go.

Although Alberto has never been a fan, I love superheroes (superhero underwear, pajamas and t-shirts all come in both boys’ and men’s sizes). Plus, superheroes have always been around (even the Mayans and Greeks had them).

Superheroes have always had difficult relationships with mortals. They want to fit it but usually can’t. Their super powers oblige them to protect often-unappreciative innocents from the clutches of evildoers.

From behind a mask, they achieve greatness but can never join the rest of humanity. When the mask is removed and they find themselves among ordinary people, they’re often awkward and vulnerable, even tortured.

Like ancient Greek gods, many superheroes are demonstratively heterosexual. But others aren’t. Besides, would you trust the word of a man behind a mask?

The gay appeal of superheroes is more than muscle and spandex. They’re a metaphor for gay life. They want to be equal but worry that revealing their secret identity might isolate them. That sense of being secretly different carries over to anyone who feels personal, emotional, sexual, physical or racial alienation. Shared experience, and not just homoeroticism, lets gays relate to them.

Gay characters in comic book are becoming increasingly common. Marvel’s “Astonishing X-Men” character Northstar revealed he was gay in 1992. In a recent issue he proposes to and marries his longtime partner, Kyle Jinadu.

DC Comic’s “Batwoman” is gay. Even the original “Green Lantern,” a DC Comics veteran (he’s been around for 70+ years), gave his boyfriend a welcome home kiss in a recent issue of the comic book “Earth-Two.”

Naturally, some people see gay superheroes as part of an immorally diabolic plot to rule the universe. A conservative Christian activist group formed by the American Family Association insists gay people are trying to indoctrinate children “by placing these gay characters on pedestals in a positive light,” as it wrote on its website. This leaves (certain) parents to teach their children to hate and discriminate against someone they admire.

Once we get to the theater, I tell the ticket booth lady two for “Spiderman.” She wants to know if we want regular or 3D, which starts later. Regular, I say. 3D gives me headaches. Though Alberto has to put his glasses away, we still get spandex.

I try to remember if the new “Spiderman” got three stars or three and a half. The theater is dark and empty. After a slew of primitive commercials two other men come in and sit down ahead of us. I look over to Alberto and smile slightly. He smiles back and tips his head. Two minutes later two other men come in and sit down towards the front. Alberto says, “More family” (from the gay anthem, “We Are Family”). I raise my head and look around like a turkey in a thunderstorm.

The movie starts, and for the next 90 minutes we, three gay couples, are engrossed by the unfolding drama of a lonely boy who endures the bullying and alienation of high school while keeping his secret. He knows the world around him can’t possible understand him and his amazing abilities.

Well, actually that is not what we see.

We see a strafigo (super cool) teenager getting into playground scuffle that wins him the affection and respect of both the bully and the local high school strafiga (hottie). This is clearly a parallel universe. All the while, the moviemakers seem to feel an urgent need to continually reassure us that Spiderman is heterosexual.

For my money, a tortured lonely young man who struggles to overcome adversity and temptation, at times sacrificing himself thanklessly for good of others, makes for a good story. But a super cool guy who likes to dress up in full body spandex and swings around the city at night leaving a trails of goo, well that’s just a guy with a fetish.

The movie ends with a yawn. We all get up and leave. No one even stays for the credits. The guy ahead of us has his arm around his partner.

With all the gay men gone, the theater is empty.