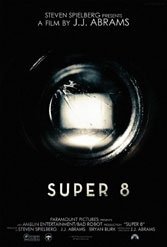 J.J. Abrams’ unvarnished homage to the early Steve Spielberg opens with a sweet conceit. In March 1979, Three Mile Island time, a group of high school kids band together to make a zombie movie using a Super 8 camera. There’s a fat one, a nerdy one, a brace-wearer, a coward, and, of course, a sensitive one (Joel Courtney), whose mother died in a mining accident. There’s also… what else: An edgy girl (Elle Fanning). So far, so good.

While honing their “production values” at an old depot, the kids witness a cataclysmic train wreck, opening the door to Sci-fi Doings of the B-Movie Kind. Enter jagged cubes, a cryptic biology teacher, sinister Air Force interlopers, a monster, heroic fathers, and you have… “ET” meets “Close Encounters” with a satchel of adolescent hormones in tow. It’s retro-homage that doubles as parody, since 1979 kids didn’t say “dude,” “awesome,” “totally” and “bogus,” and Abrams knows it.

But the real rub isn’t jargon, it’s Abrams’ inability to make the more promising story line — movie-loving kids with zombie lust — prevail over the more hackneyed one — aliens, dastardly plots, and zounds of explosions. For a while Abrams pursues pubescent love (sensitive boy and hard-knocks girl), but eventually the homesick monster needs feeding, leaving the movie to dangle in no-man’s land.

Spielberg’s early-career wizardry, the one Abrams honors, breathed new life into Saturday Matinee-style movies (“Close Encounters,” 1977; “Raiders of the Lost,” 1980; “ET,” 1982) while making aliens compassionate and kids into charming, pocket-sized adults. Puns and irony were part of the package, as were manipulatively rousing John Williams soundtracks. At the time, all of it seemed literally awesome.

Borrowing backward, Abrams can’t pay it forward and “Super 8” stalls in its derivative juice. Suspense vanishes. So does kid charm. Do stick around to watch the credit crawl, which allows the finished zombie flick — “The Case” — to play out. It’s as charming as anything in the movie has to offer.