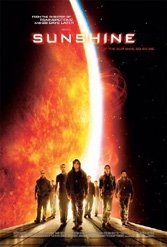 Danny Boyle’s sci-fi/horror thriller about a team of astronauts dispatched to rekindle the dying sun is disappointing because it promises so much only to veer into middling hysterics. Icarus 2, with five men and two women aboard, wants to accomplish what ill-fated Icarus 1 mysteriously failed to eight years before, implant a “stellar bomb” in the hub of our ailing star.

Boyle, a master of hallucinogenic suggestion, conjures “Alien”-like claustrophobia in the early going. The multinational crew is at odds. One makes a mistake and goes mad. Another is a coward. Yet another is a young, laconic, and shaman-like physicist (Cillian Murphy) entrusted with ensuring the bomb detonates. Two women, a botanist and a pilot (Michelle Yao and Rose Byrne), watch the boys go at it, but little else.

When I-2 comes upon lost-in-space I-1, screenwriter Alex Garland yields to his Freddie side and what began as a journey into solar system and sanity morphs into protracted Halloween.

More’s the pity, since the first 40 minutes teem with persuasive human and physical malfunction. Icarus, for example, is the ship’s computer, a female HAL-9000; but the plot twist goes nowhere. As he proved in “28 Days Later,” Boyle can transform futuristic horror into working class settings (the same sort of early frenzy ratchets up “Slumdog Millionaire.”) But while “28 Days,” also a Garland script, had no happy ending to satisfy, this one has mankind on its shoulders, too heavy a burden.