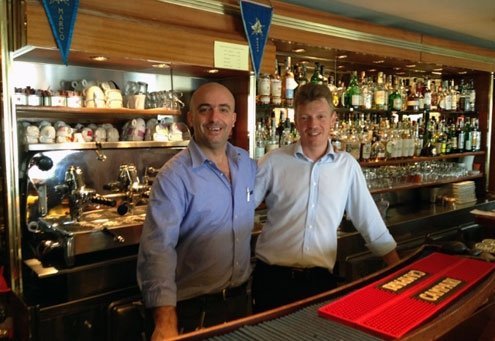 wo of my favorite places to watch a Ligurian Sea sunset, glass of wine in hand, are in walking distance from my home: the Bar da Nicco (Ruta di Camogli) and the Bar Dai Muagetti (San Rocco di Camogli). Marco Maggiolo owns both. He’s as entrepreneurial as his father, Nicco, and his mother, Rosa.

Nicco and Rosa grew up in rocky Punta Chiappa, a fishing community on the lower slopes of the Monte di Portofino promontory near both Ruta and San Rocco. In 1974, Nicco, then in his late 30s, left fishing and Punta Chiappa behind to buy a locale, or bar, in Ruta — a prescient move, since Punta Chiappa, near Portofino and Rapallo, would later put aside its fishing legacy to become a tourist destination.

Rosa later took charge of the kitchen at growing Bar da Nicco. In 1986, Marco joined the business and began developing both the restaurant and the wine list, creating an enoteca (wine shop/wine bar). He bought a magazzino nearby to store wine at the proper temperature and expanded his list from 30 to 300 wines, mostly Italian.

Marco’s most recent acquisition is the Bar Dai Muagetti, on the path to Portofino a few meters past San Rocco. Known locally as “Il Baretto” (the little bar), it’s in a grotto dug from a rocky cliff as a World War II bomb shelter. All the tables are outdoors, some on terraces also dug from the rock. Marco Pavone, a sommelier who began as a barman at Da Nicco (where he met his wife Chiara) manages Dai Muagetti and also helps Marco Maggiolo with choosing wines.

“Marco and I visit the vineyards, talk with the producers and taste the wines ourselves,” Marco Maggiolo told me. “We have a few wines that cost €200 or more, but mostly we look for high quality wine in the €10-€30 range that pair well with our food.”

Every week, the two Marcos choose a dozen or so seasonal wines to offer by the glass. The last I visited they were featuring local Ligurian whites (a Vermentino, a Pigato and a Bianchetta di Genova), a French Chenin Blanc, a Sauvignon Blanc from Friuli Venezia Guilia, some light and easy reds (a Valpolicella from the Veneto and a Grignolino from Piemonte), a few medium reds (Sangiovese from Chianti, a Piceno Rosso from Le Marche — Montepulciano and Sangiovese grapes), a St. Magdalener (Schiava grapes) from Alto Adige/Südtirol, and a Sicilian Nero D’Avola.

I asked Marco to pick out six economical but noteworthy wines for me to taste. Pulling down bottles from his “wall of wine,” came up with these selections (his prices):

Sip on any of these wines during a hot Ligurian summer sunset and you’ll appreciate the magic of the place.