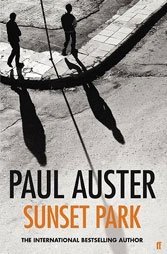 “Sunset Park” lacks the subversive originality that made Auster a key figure on the New York literary scene. He fritters away beautiful words on a story that evaporates more quickly than it unfolds. Part of the problem is that Auster tells rather than shows. We know his tragic lead Miles Heller is deeply moral, but only because Auster repeats it like a mantra. Miles killed his stepbrother in a teenage freak accident but hides the truth from his family. He cuts off all contact with his privileged Manhattan past, reinventing himself as a Florida nobody. There, he scuttles through foreclosures — corpses of the 2008 financial crisis — snapping photos of the wreckage he’s paid to clean away. His one salvation is a 17-year-old Cuban girl named Pilar, whose alleged brilliance is undermined by Auster’s wooden description.

Forced back to New York after Pilar’s sister Angela threatens to turn him in for statutory rape, the story veers into insufferable daytime soap opera. Miles squats in Brooklyn’s Sunset Park neighborhood with childhood friend Bing (who’s been feeding information about Miles’ whereabouts to his parents for years), doctoral candidate Alice and artist Ellen.

Intoxicating language only worsens bad storytelling (“the human body has many secrets, and it does not divulge them to anyone, except those who have learned to wait.”). Look to Auster’s earlier “New York Trilogy” for craftier tales.