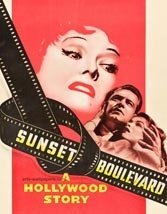 Holden is Joe Gillis, a down-on-his luck screenwriter who while trying to dodge L.A. repo men stumbles into a decrepit “mansion of the damned.” In it lives long-eclipsed silent screen star Norma Desmond (Swanson, herself a silent era diva) and her butler-protector Max (Von Stroheim). Ohio-boy Gillis, who has nearly opted out of Hollywood, is bowled over by “the great big white elephant of a place,” its opulence frozen in another time. He marvels at vain, half-mad Norma, “still waving at a parade that had long since past.”

With nowhere to go, Gillis bunks down as a kind of part-time gigolo, first yielding to Norma’s invitation to work on a script she’s written and later to her dramatic affections, all the while mocking himself, and her. On the side, he forms a bond with cocky scriptwriter Betty Schaeffer (Nancy Olson), engaged to his best friend but gradually drawn to him.

The climax is a foregone conclusion — the movie opens with a murder — but Wilder builds meticulous character studies around his three stricken centerpieces, each broken in a different way. Norma tries reliving her past and sidles up to Cecil B. Demille, who pities her. “I am big,” she tells herself, “it’s the pictures that got small.”

Wilder’s keen writing, sharpened by the Gillis-Holden narration, produces a slew of memorable one-liners about time’s savaging effect on stars and their entourages. “There’s nothing tragic about being 50 unless you want to be 25,” Gillis tells Norma, who soon adds paroxysms of jealousy to her macabre repertoire. By the end, she’s delusional mugging for newsreel cameras. Wilder and cowriter Charles Brackett are at their best in transforming her raging twilight into a Hollywood masterpiece. Every sliver of dialogue and each glance are vital to the well-edited whole. In addition to De Mille, Hedda Hopper and Buster Keaton also have cameos.