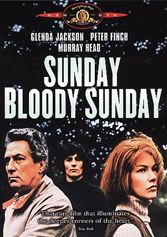 A period-piece stunner drenched in sadness. Divorcée businesswoman Alex Greville (Glenda Jackson) and Jewish doctor Daniel Hirsch (the late Peter Finch) share bisexual artist Bob Elkin (Murray Head) as a lover. Greville and Hirsch are grudgingly aware of each other but aren’t willing to relinquish young Bob, who is preparing to leave for New York.

On a rainy wintertime London Sunday something and nothing come to a head, like a storm of whispers. Director John Schlesinger (“Midnight Cowboy,” “Marathon Man”), operating at a delicate time in the history of both hetero- and homosexuality, probes the empathetic cost of needing not to be without love. He’s remorseless, often cruel, but never fake. In fact, Schlesinger’s willingness to portray hurt characters (sabotaged in this case by their own discretion) went well beyond his American counterparts.

The film caused shock waves not so much because of its emotional frankness but because Finch and Head kiss, which just wasn’t done then. The Elkin character is maudlin and flaky, too much so, but it’s Finch and Jackson — two of the great actors of their generation — who do all the heavy lifting.