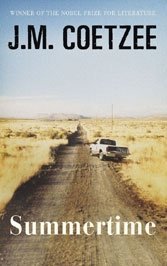 Coetzee’s previous novel, “Diary of Bad Year,” a corrosively fine book about a gruff and melancholy novelist named JM, should have come with a caveat: “The Worst About Me is Yet to Come.” It’s no secret that Coetzee’s examination of personal identity has descended into trench warfare, with the South African Nobel Prize winner splashing in mud and muck. Since “Elizabeth Costello” (2003) and the “memoirs” that followed (“Boyhood” and “Youth”), he has foraged for a semi-fictional self whose identity and predilections overlap with his own.

In “Summertime,” all parapets fall. With the exception of early 1970 diary entries that open and close the novel (making this the Postcriptum of the memoirs), Coetzee’s preemptively constructed fate is now squarely in the hands of Mr. Oliver, his invented British biographer, whose interviews, mostly with women, stitch together a portrait of the author as a young and awkward South African (“several stories from several perspectives,” says Oliver).

Where is poet and writer John Coetzee now? Dead of course. He died in Australian, when and how isn’t clear. Writer and biographer are thus granted an extraordinary kind of immunity, a confessional conceit only Coetzee could pull off with a straight face. The writer’s social and sexual clumsiness — a portrayal Oliver gets time and again from his subjects — is folded into reader awareness that all this credibly manufactured doubt, close to loathing at times, is being produced and directed by the author himself.

What form does it take? In the early going, it’s the Coetzee of “Boyhood” and “Youth” recalling bits of a three-year stretch between 1972 and 1975 when he lived with his aging accountant father outside Cape Town, critical of apartheid but too disengaged to act. After that come interviews with four women and a man; Julia (once an adulterous lover), Margot (a cousin), Adriana (an unwilling friend), Martin (a fellow teacher) and Sophia (another lover). Julia sets the tone early on. She sees “… a widower and his celibate son, two incompetents, two of life’s failures…” Margot considers her cousin “prickly, incompetent, opinionated, ridiculous.” Adriana, a Brazilian woman whose daughter was tutored in English by Coetzee, considers him “a little man, an unimportant little man,” asexual and “disembodied.” To academic colleague Martin, “misfit” springs to mind. Frenchwoman Sophie attempts restraint, “He was not awarded the Nobel for nothing,” she says, but then adds: “I never had the feeling I was with an exceptional person.” Adriana even recommends that Mr. Oliver title his biography “The Wooden Man.”

The question becomes “why?” Why savage a posthumously-invented and reconstructed self? The answer is that only the novelist can authoritatively invent the writer. Fictionalizing the outlines of biography controls memory, while the act of making up the remembrance of others, their doubts and insights, their mockery, emerges as a singular act of individuality.

Coetzee performs no prose miracles here. He does however use his Nobel status to provocative ends, probing and brutalizing personality to elicit a critical self-portrait he can recognize, swear by, and most importantly rise above. Few novelists are at once so brave and cunning.