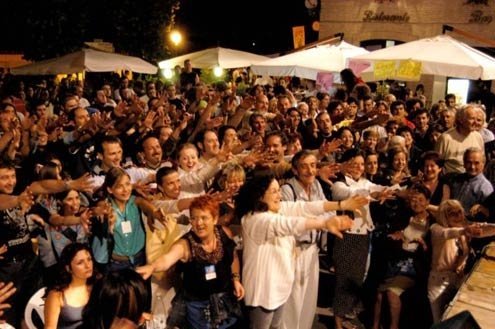 The busker festival at Colmurano, near Macerata.
I

f you live in rural Italy, one of life’s great ironies is the relationship between sweltering heat and industry. While summer heat waves make sensible Italians seek ways of slowing down, July and August are magnets for visiting foreigners.

For those in the hospitality industry — hotels, restaurants, and agritourismi — summer is easily the busiest and most lucrative time of year. Income from the two months alone can bring in as much as what businesses bring in through the remaining 10 months.

Those of us in the country seize the moment. We wait tables, cook meals, clean pools, change beds, and make an effort to help out harassed tourists who can’t understand why English is not Italy’s national language.

English visitors are particularly aggrieved by the language barrier, which they think is a plot directed against them. Why, they want to know, can’t a garage attendant speak English?

But the summer season also brings non-financial benefits. Otherwise private people are suddenly more accessible. I live in a medieval town located about 700 hundred meters above sea level. For most of autumn, winter, and even into spring, a cold wind blows through the streets, not exactly stand-and-chat weather.

Quite the opposite. When it’s chilly, everything about the town’s layout and look screams, “Closed.” The houses are tall, with tiny windows; the cobbled streets are narrow and wind toward a piazza that is usually deserted except for a few old men who gather near the bank. The town itself is surrounded by impregnable stone wall.

All this has an impact on townspeople, who while polite and friendly are also extremely reserved until the advent of summer.

The heat seems to change everything. Suddenly, the outdoors is a leading attraction. In the evening, town locals — some of them true mountain men — lounge around the park chatting about the old days. Chatting becomes the summer pastime.

The change gives the town’s straineri a chance to feel just a little less foreign. I get to know my neighbors. I listen to their stories.

Some talk about the history of their big families, others tell tales of having hid British prisoners during World War II. There’s ancient gossip, which is charming when compared to the salacious tone of today’s equivalent. It’s amazing how clearly the elderly remember the minute details of their lives.

In the evenings, traffic is banned from the piazza, allowing children to play while their parents linger in coffee bars. It’s a tourist-welcoming transformation that also acts as a source of social stimulation for all of us.

True, the more militant farmers stay above the tourist melee, working instead at their harvests and keeping to the ballet of machinery and timing they can’t get wrong.

But for the rest of us, summer is stimulation. Before coming to Italy, we lived in London, certainly among the world’s most multicultural cities. I consider summer our town’s foray into that same kind of internationalism.

I’ll never forget the first time we stumbled on the International Busker’s Festival at Colmurano, near Macerata. Smelling singed hair and roasting meat while driving back from the beach, we stopped in the town — population 1,250 — where we found an array of musicians, acrobats and magicians (and fire eaters, hence the singed hair smell).

We were intoxicated by the scene and now make it a point to always attend. Summer stimulation nourishes us through the long winter months. We’re able to speak English and feel the throbbing of the community. Too bad we have to work so hard at the same time.

But now at least I have a card to play in winter. I can go to the bank and know the old men there will greet me warmly. It’s not much to get you through a winter, but it is a promise of things to come.