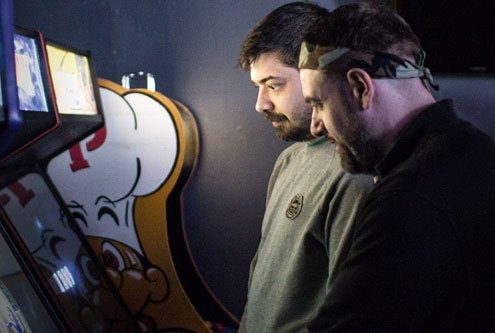 Aesop Rock and Rob Sonic (Hail Mary Mallon) back at it with "Beastiar" (Rhymesayers).
B

efitting the time-honored tradition of album release cycles, November is where the new-music excitement dies down and people start focusing on year-end lists and thinkpieces on “what happened.” Which is too bad, because some of the year’s best records are overlooked simply for coming out in the last sixth of the year.

Hail Mary Mallon‘s Bestiary (Rhymesayers) is just such an example. Veteran hip-hop emcees Aesop Rock and Rob Sonic return for their second collaborative full-length and it’s no less sharp than 2011’s Are You Gonna Eat That?.

Critiquing this record isn’t hard — its limitations are a byproduct of the simpler hip-hop worldview in which “mainstream vs. indie” still held water. But those same limitations free its two protagonists to rap at their best within strict confines — indeed, Bestiary gets its title from the idea that the two rappers went “beast mode” on this album.

It shows. Lyrically, Aesop and Rob are on point. The 14 songs feature the freewheeling verses and stream-of-consciousness sense of humor that made their debut such a fun listen. Strung together loosely on the premise of a fundraiser concert for a local bowling alley, Bestiary showcases the duo’s often dense couplets and vivid non-sequiturs. Best example: With booming bass pinning down the beat on “Whales,” Aesop attributes money on his mind to “five haircuts at the same time,” “sharkfin pastry, summers on Mars,” and “40 bald eagles sewn into a coat.” It’s so preposterously exaggerated that it takes hip-hop’s oft-maligned materialism and blows it out comic book-style.

Musically, Aesop and Rob handle production with DJ Big Wiz once again handling turntablism duties. The songs are unified in sound, at times atonal and cold, at others funky and warm. As such, it readily recalls the headier days of El-P’s Def Jux imprint, a New York label specializing in futuristic backpack rap that featured early releases from both Aesop and Rob.

What’s interesting is how similar Hail Mary Mallon is to El-P’s current work (with Killer Mike in the much-lauded Run the Jewels): Both are match-ups between old-hand emcees who have moved past zeitgeistian success in favor of rapping for rapping’s sake. Though El-P has received more attention, the Mallon project predates it and feels like something of a blueprint. Appropriately, its two members chart a more modest, self-contained path. But the results are just as enjoyable.

Venezuelan native Arca has also spent the past few years carving out a path of his own. The man born Alejandro Ghersi leaped from an auspicious pair of EPs in 2012 to a noted mixtape and high-profile slots helming beats for Mykki Blanco, FKA Twigs and Kanye West’s Yeezus (including “Blood on the Leaves”). He’s as “future” as our present idea of futuristic music will allow.

The journey continues with his first proper full-length, Xen (Mute). It is an expansive, indulgent piece of work covering a wide range of influences and united by the kind of vision that could only come from someone who has a perfect handle on their music.

Opener “Now You Know” sets the stage with thumping bass hits, broken beats, liquid synth tones, and infinite decays. There’s the brief hint of an acoustic guitar, a flute sample, and maybe even actually water in the mix. That so much can be packed so smoothly into a sub-four-minute song is an impressive feat on its own.

All the more impressive is how he follows it up with “Held Apart,” a simple piano ballad, and the glitchy title-track thereafter. Seamlessly bringing these wildly diverse sounds together as one mood-setting scene, Ghersi carefully paces these 15 tracks. You feel the burden of his considerable talent less and less on repeated listens as you sift through the highlights. Though “Thievery” was selected as the first single and is perhaps the most conventional beat here, the orchestra n’ Auto-Tune of late-album ballad “Wound” might be a better indication of what he can do when he moves beyond his own conventions.

It’s easy to picture a world where Arca rules the roost of pop production (and we may yet see that as soon, as his work with the new Björk record is complete). For now, however, Xen acts as a statement of intent. If your favorite songs (or favorite songs to hate) sound anything like this in the coming years, you’ll know whom to thank.