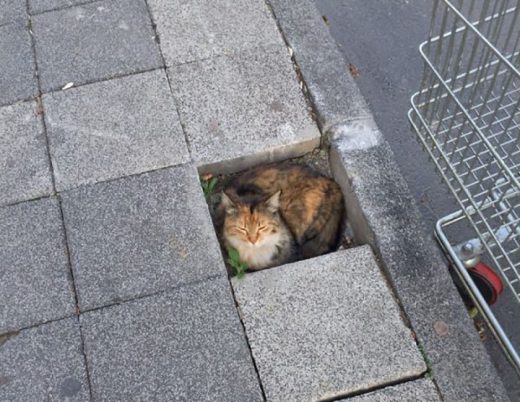 People actually leave cats at my mother-in-law's doorstep...
A

woman walks into a gelateria and asks to try a teaspoon of nocciola. She read somewhere while researching her trip to Italy that you can always judge an ice cream store by the quality of its hazelnut.

She’s not impressed, and she tells the ice cream maker so. She leaves, and the ice cream maker goes on Facebook to pen a very long, very obscene rant about the insolence of foreign tourists. He posts it on the group that includes pretty much every other Facebook-using local in Manciano, and there are plenty of murmurs of sympathy and consolation.

The ice cream maker is at the end of his tether. He has a notoriously bad temper, constantly picking fights with locals and tourists alike for making ridiculous demands for glasses of milk or asking stupid questions like whether the bread in his aperitivo sandwiches is homemade. It isn’t. He’s just come out of a very public breakup with his boyfriend, who saddled him with said ice cream store and a whole lot of debt. He just wants to sell, so he can pack up and move to New York, where he would presumably pick more fights with the natives, if only he spoke a word of English.

It’s summer in Manciano, and we’re all feeling a little bit cuckoo.

It’s a complete farce to believe that every pizza, pasta or gelato in Italy is incredible simply because it was made in the geographical landmass that invented it.

For the record, I would have never told an ice cream maker their gelato was terrible to their face. I have eaten many a terrible gelato. It’s a complete farce to believe that every pizza, pasta, or gelato in Italy is incredible simply because it was made in the geographical landmass that invented it. But I have never had the courage to give any purveyor of foodstuffs a piece of my mind. I usually just eat and moan later out of earshot.

While we’re on the topic of things in earshot, I was reclining on my terrace listening to an episode of “Walker Texas Ranger” blaring from my neighbor’s kitchen when I was reminded of a story I heard at a recent dinner party.

Italians don’t invest in air conditioning. We have cement walls that feel thick enough to resist a nuclear explosion, and that should be good enough. Or at least it was… before global warming.

On what feels like the hottest summer on record, air conditioning would be especially lovely, thank you very much. Instead, we make do with leaving our windows open and our shutters closed, which is why I can hear everything my extremely old and extremely deaf neighbor watches on her circa 1970s’ television.

Adelina mightn’t be able to hear the Italian actor dubbing Chuck Norris, but she can hear the young lady who lives above her perfectly fine. Our newest neighbor is not from around here, and if you know anything about small-town Tuscany, you’ll know that’s akin to being a Satanist. I once saw her stare at the wall in front of her window for the better part of an hour. So I was little miffed to hear Adelina had called the Carabinieri on her twice.

Our friend on the third floor is, as the Carabiniere tells it, a voraciously loud lover and entertains gentleman callers at all hours of the night. Adelina has made repeated noise complaints, and every time the Carabinieri calls, she invites them in with offers of coffee and liquor without the slightest hint of embarrassment.

My husband Giulio and I have our bedroom on the other side of the house and didn’t hear a thing. Luckily, gossip spreads like wildfire when everyone is far too hot to do any work.

Since that includes me, I escaped my office to go for a walk. We don’t go in for that quintessentially Italian tradition of the evening stroll, so the streets were almost deserted. I wandered past my mother-in-law’s house just as she was in the middle of a heated argument with the local baker.

Our friend on the third floor is, as the Carabiniere tells it, a voraciously loud lover and entertains gentleman callers at all hours of the night.

My mother-in-law has had a string of bad luck recently. All her cats have died. Losing one or two cats in a year is a tragedy. Losing seven is a curse. So she was so very pleased when a frisky, light-grey kitten appeared at her doorstep last week. She named it Gigi and built it a little fort with chairs and blankets on her terrace.

A couple of days later, the baker came knocking and accused my mother-in-law of stealing her cat. My mother-in-law was mortified. People leave cats at her doorstep. She doesn’t steal them. But she didn’t particularly want to give Gigi back, either. She’d already bought her a bunch of toys and a hairbrush, and she had at least three years’ worth of cat food left over from all its dearly departed cousins.

As I walked by, my mother-in-law was standing about a meter from the baker with Gigi in between. Both of them were whispering sweet nothings to the small cat staring blankly into the distance. The idea behind this exercise was simple. Whoever the cat walked towards would be declared its owner. As I type this, I honestly wish I was making this story up. Sadly, I am not.

And while I would very much like to leave you on this cliffhanger, I can’t resist giving away the ending. Gigi chose my mother-in-law.

It seems that when it comes to affection, cats, like most humans, have very short memories.