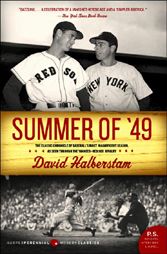 What distinguishes these inextricably linked volumes from the many mainstays in Halberstam’s rich catalogue is how they successfully evoke a time through a sport. You can read Halberstam’s sprawling “The Fifties” — which spans the time between the first of these books and the second —and not emerge as enriched about what the United States represented to those who looked to diversion as gruel.

“The Summer of ‘49” (Harper) ostensibly chronicles the two most powerful baseball team of the period, the rival New York Yankees and the Boston Red Sox. With ardor, Halberstam tightens his focus on Ted Williams and Dom DiMaggio of the Red Sox, and Joe DiMaggio, Dom’s brother, in New York. Joe is sensitive, laconic, vain; Dom, in his shadow, is more assured but far less talented. Williams (“Teddy Ballgame”) is a surly, press-hating superstar. Few of these men and their teammates know what to make of the ascent of TV, or know to respond toward racial integration— mean and inoffensive bigotry (toward blacks, Jews, Italians) is everywhere . So are Italian-Americans. The ethnic mélange is alone unforgettable, different tribes on the same team.

“October 1964” (Ballantine) is a necessary sequel. In it, Halberstam employs the World Series between the Yankees and the St. Louis Cardinals to presage rougher times ahead for society at large. The Yankees of Mickey Mantle were old-school, stiff, and largely white. The magnificent Cards had Lou Brock, Bill White, Curt Floor, and the raging, self-confident, magnificent Bob Gibson, a pitcher. All were black.

Baseball is fundamental to a full understanding the American character because most of its participants were largely uneducated in anything but the game they played. They were the gods of American vulgarity. Many drank heavily, played in pain, desperately sought personal success and public acclaim; and the public took vicarious pleasure in conjuring heroism and folly from their successes and failures.

The American dreamscape, which melds purity and arrogance, depends most on baseball; it forged the first idols. The games languorous pace has also been good writer’s best friend — he or she can watch, dream, and then write.

Halberstam wrote like a dream and let his interviews do the rest. When a reporter (baseball attracted hundreds) berated the Yankees on their barely-educated catcher, Yogi Berra, in 1949, manager Casey Stengel stepped in: “A college education don’t do you no good up there.” No, it don’t, then or now.