Summer for the Gods: The Scopes Trial and America’s Continuing Debate Over Science and Religion 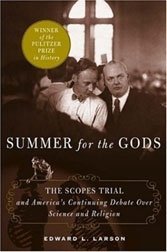 Edward J. Larson has written a brilliant, judicious account of the trial of John Scopes, a schoolteacher prosecuted by the state of Tennessee for teaching the theory of evolution in a public school. The trial was dubbed the “trial of the century” (it wasn’t the first) for its illustrious protagonists. The prosecution was led by the anti-evolution politician William Jennings Bryan, who argued that Darwin’s theory directly attacked religious belief in the divine origins of man. He claimed such teaching would provoke the disintegration of social values and the ruin of morality. He saw his mission on the witness stand as a crusade. The people of Tennessee are Christians, he stressed, and they — not high-falutin’ experts — should decide what was fit or unfit to be taught in their schools.

Clarence Darrow, the iconoclastic defense lawyer and self-declared agnostic, led the defense. Darrow’s position was that what was at stake was a return to medievalism and the bludgeoning of the human intellect in the name of orthodoxy. It was, in his view, a question not of religious truth but of human rights.

The centerpiece of the trial was the joust between Darrow and Bryan. Darrow grilled Bryan on his literalist reading of the Bible, laying bare the flimsy intellectual foundations of such blind faith. Bryan, for his part, held to his position that it didn’t matter if what the Bible said seemed incomprehensible to us; it was the word of God. He did, however, concede that the six “days” of creation were best interpreted as geologic “ages,” a concession that later fundamentalists would never forgive him.

Bryan died a week after the trial. Some of his supporters blamed Darrow. H.L. Mencken, who reported on the trial for the Baltimore Sun, gave a brief eulogy: “If the village barber saved any of [Bryan’s] hair, then it is curing gallstones down there today.”

The Scopes Trial has echoed across America’s cultural battlefields for over eighty years, most recently in the Katzmiller vs. Dover ruling of 2005 that the teaching of Intelligent Design “violated the constitutional bar against religious instruction.” In light of such recent attempts to dress up creationism in sheep’s clothing, we might be grateful to William Jennings Bryan for his honesty; at the very least, he felt his religion was strong enough to survive the assault from science and reason on its own merits — or die fighting.