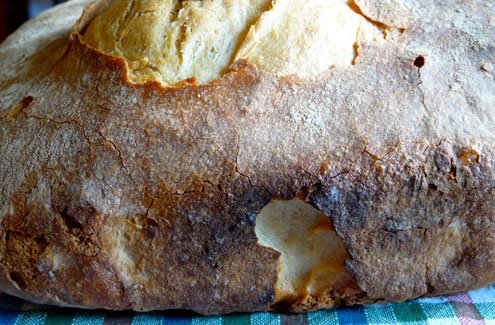 Bread is not for dipping or absorbing excess sauce. Photos by Letizia Mattiacci.
B

read may be the one Italian food staple most visitors don’t envy. Over the years I’ve heard all kinds of complaints: it’s white and tasteless, lacks body, and doesn’t come with a bowl of dipping oil. Hopeless.

But bread is like your pillow. You get used to a familiar flavor and texture. Most important, there are endless ways to eat it.

Italy has hundreds of kinds of bread, most broken down by region. Sardinia offers thin Pane carasau, also called “music paper”; robust Altamura is a staple in Puglia; focaccia, in all its many forms, is also a bread.

Only specialty shops and larger supermarkets stock non-regional breads, and even then the variety is limited. Only relatively upscale restaurants offer flavored or seeded breads. Everyday bread tends to be plain.

Why is this? Why is a country acclaimed for its magnificent cuisine happy with boring bread?

The answer is its role in the meal. With the exception of special occasions, bread is nothing more than discreet companions to the delicious food so many know and love. It’s not for dipping (why spoil your appetite with bread and oil — or butter — when so many good things await? It’s not for absorbing excess sauce. Italians usually don’t over-sauce their pasta, so no bread is needed to soak up the plate.

When you go to a restaurant, watch the way Italians eat. They take a bread slice, break it into small cubes, and eat it with soups, appetizers or second course.

Want “special” bread? Fair enough. Make yourself some focaccia, pack it in the picnic hamper, and use it as an appetizer, or bring it to a party. Please just don’t make a sandwich with it.

The dough is based on my homemade pizza recipe but with only a quarter of the original yeast content. The slow proofing yields lighter dough. I’ve divided the preparation recipe into two steps over two consecutive days, to minimize the effort.

Add the yeast mixture and mix at maximum speed until soft dough forms. Alternatively, mix ingredients by hand in a large bowl, then turn the dough out onto a lightly floured surface and knead until smooth and elastic. Make sure to make the dough as wet as possible but still firm enough to obtain a soft ball.

Transfer the dough into an oiled bowl and cover with plastic wrap. Place it in a draft free area of your kitchen, covered by a tea towel.

— Day 2: In a covered pan, slowly soften the onion slices in a couple of tablespoon of extra virgin olive oil until translucent. Do not caramelize or they will burn in the oven.

About an hour before dinner, knead the dough briefly, roll it, and transfer into an oiled pizza pan.

Generally, I coat the pan lightly half with olive oil and half with sunflower oil. Once again, place the pan in a draft-free place, cover with a tea towel, and let it rise until doubled in bulk, about half-an-hour.

Distribute the mozzarella, onions, and chopped sage leaves over the focaccia dough. Drizzle with 1-2 tablespoons extra virgin olive oil, season with salt and freshly ground black pepper, and bake for 8-to-10 minutes or until golden below and around the sides.