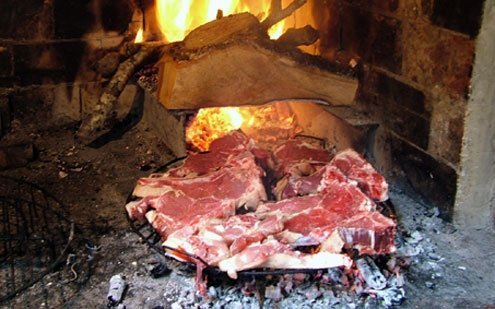 Italian grilling is more about the food than the machine.
E

Using lava to grill, he cooked up soup, flaming lobster, monkfish and shallots, while his customers relaxed and watch the spectacle. Price? About $1,000 for two. “If someone says that something is impossible,” Eiriksson told a news agency, “I feel the urge to try it.”

Barbequing in Italy doesn’t mean going to Etna or waiting around for sleepy Vesuvius. Thanks to globalization, central Italy finally offers quality grills at reasonable prices.

There are three main steps: choosing between charcoal or gas, picking the size of the grill in relation to available space, and the design choice, bearing in mind that price depends on the grill’s options.

Leroy Merlin, Italy’s most well-known DIY chain store (the company is French), offers a wide selection of grills. There are six outlets in the Rome area (nine in Milan and one in Florence).

You can also find functional, inexpensive gas grills at your local hardware store or supermarket. My own supermarket model has a lava-cast porcelain cooking bed and ran €65.

Unlike a century ago, when only local coal merchants sold charcoal, supermarkets and hardware stores generally stock three or five-kilogram bags. Meanwhile, gas cylinders come in five or 10-kilo canisters and are available in hardware or camping supply stores.

In Rome, when you talk about barbecue, you just say alla brace, which literally means “on the embers.” For Italians, what characterizes this cooking isn’t the tool used for grilling or a barbecue, but the ingredients (meat, fish, shellfish or vegetables) and the recipe (marinade or sauce added at the end, made from basic ingredients). It then becomes a question of finding a place where you can light up wood or coal.

Sardinia has “Porceddu,” “pig in the ground.” The cook wraps a suckling pig in myrtle leaves and cooks it in a specially-dug ditch filled with pre-heated coals. You can’t match the dish’s unique taste just by putting pig on a spit and basting it with sauce.

Unless you live next door to a supermarket that stocks global foods (unlikely), you’re not apt to find your favorite BBQ sauce (as in Mesquite, A1, Hunt’s, etc.). While ketchup, mustard, and relish are available, hot dog and hamburgers buns are harder to find — though barbecue mania has pushed some supermarkets to stock them.

On Rome’s plus side is the meat. You can get excellent ground beef from the neighborhood butcher (macellaio) and sausage cuts from the local salumiere. Every neighborhood has an “er meglio,” or, “the best,” in each category. As for bread, bun-wise you can use rosette, which vaguely resemble American buns, or just make do with pane casareccio, homemade bread.

If you live in an apartment with a terrace, balcony or a garden, you’re in business. You can pick up a disposable barbecue at a hardware stores, or, if you feel inventive, you can play Iceland chef and assemble your own grilling system (please avoid burning down your apartment complex). If you want to eat out, Rome has plenty of restaurants that focus on grilled foods (alla griglia; see below). These dishes, meat and fish, usually have their own category on a menu. Most pizzerias have grills near their ovens.

Now then, down to business. This month’s recipe is Pollo alla Diavola, or “Devil’s Chicken.” It’s not clear if the devil was in the peppers, which are essential to the recipe, or the flames licking the meat itself. In some rural areas, rabbit or other game is substituted for the chicken.

Preparation (for the marinade):

I recommend serving the meal with a Merlot-based red wine (Veneto, Friuli or Trentino Alto Adige), such as a Merlot delle Venezie.

Here are three of my favorite Rome grill spots: