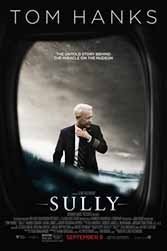 Ask Tom Hanks to carry a movie and give him the script and direction to do so, he usually obliges, making the world a better place for his Jimmy Stewart-like efforts. His performance in director Clint Eastwood’s simple but superb film is entirely in line with the heroically fictionalized character he plays — US Airways Captain Chesley Sullenberger, who in January 2009 managed to land a crippled airliner in the Hudson River with no loss of life. One hundred and fifty-five people got on the flight, bound for Charlotte, NC, and all 155 got off, albeit on its waterlogged wings. Suddenly, Sully was a media darling.

Eastwood takes a deft approach, introducing Sullenberger — known to all as Sully — and copilot Jeff Skiles (Aaron Eckhart) under sharp questioning from an exaggeratedly villainous National Transportation Safety Board panel probing the crash. Sullenberger’s exalted status means nothing to the investigators, who above all want to know why he didn’t take the plane back to La Guardia or nearby Teterboro, New Jersey after birds knocked out both its engines. Early computer simulations suggest he could have chosen either option instead of chancing a risky water landing. Hanks’ Sully is a quiet, introspective and logical man who isn’t above second-guessing himself, which he does, giving the story an opening to flashbacks that offer up Sullenberger’s days as a crop-duster and military aviator. Eastwood then returns to a masterful reconstruction of the flight itself, giving clout to Sullenberger’s gut decision “to eyeball it.”

The vindicating pieces fit, with Hanks and Eckhart producing understated but riveting performances. “Aw come on Sully, when’s the last time you heard of anyone landing a jet plane on the water and everybody lived,” an airline official tells the dazed and bashful Sullenberger after a hotel employee gives him a grateful hug. Though Eastwood takes liberties to lionize Sully and honor the can-do spirit of post-9/11 and post-Great Recession New York City, he avoids most hero-worshipping pitfalls and keeps the proceedings to a lean 90-minutes.

If you want a small example of top-notch Hollywood film-making that includes one of finest actors of his generation, “Sully” is as good as it gets. It’s also a testament to octogenarian Eastwood’s gifts as a director and his fondness for odes to American optimism.