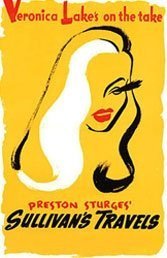 Preston Sturges’ charming feel-gooder did more than provide a witty if not screwy antidote to American depression and the raging world war of its day: it mocked Hollywood values while paying homage to the uplifting cheer of motion pictures.

Sullivan (Joel McCrea) is upscale frat boy who’s also a successful maker of comedies and musicals. But when he comes up with a movie about world woes, his producers think he’s crazy. Who needs that? And what does he know about woe? Determined to get his way, he tells them he intends to embark on road trip with just a dime in his pocket, a tramp looking for trouble. And he does.

His first escape gets him as far as a Hollywood diner, where he meets going-nowhere starlet (Veronica Lake), who has him figured: “You don’t know what trouble is, spoiled boy.” He comes clean about his wealth and fame and she demands to join him on his dime-sized adventure. Off they go, with Sturges deftly mixing comedy, screwball scenes, and plenty of jibes mocking the silver screen life.

“Caliph of comedy” Sully, a modern-day Gulliver, is unwavering in wanting to experience the misbegotten side of life — soup kitchens and freight trains — only to discover you really can’t switch social station on a lark. Not when you have an entourage. Only a twist of fate can manage that, and fate obliges, in “be-careful-what-you-wish-for” style. Part inspirational tale, part homage to the world’s need for laughter, this period-piece Americana of the highest order.