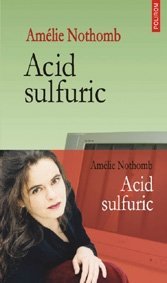 By Amélie Nothomb, translated from the French by Shaun Whiteside

Nothomb’s parable-cum-parody about voyeurism, reality TV, torture, and human resilience never quite escapes caricature. Pannonique is a 20-year-old European citizen randomly kidnapped South American-style from city street to extermination camp. Her kidnappers aren’t outlaws but ratings-hungry producers eager to find contestants for “Concentration,” a prime time reality show about prisoners, torture, and execution. At the camp, Pannonique gets a Dachau numeral-name, CKZ-114, and mesmerizes one of the “kapos,” or guards, who are “Truman Show”-like draftees looking to win celebrity by beating up and murdering. Society, meanwhile, is little more than an audience share and print newspapers exist to pillory the program while doing nothing to stop the filming.

Nothomb’s unhappiness toward postmodern passivity is manifest in taking the “Survivor” paradigm to its logical extreme. Pannonique is her grouchy Christ and the slim novel’s apotheosis is when the producers, to pump up ratings, get the audience to vote over who’s to die next. Nothomb has less interest in originality than opening up a viaduct for demoralized discontent — “Humanity was that disparate swarm,” she writes, “That ludicrous supermarket that sold everything and its opposite. To hate humanity was to hate a universal encyclopedia.” Into which she adds a reductio ad absurdum entry —TV-sanctioned mass murder — that’s been around the literary block more than a few times. Shaun Whiteside’s British-slang translation doesn’t quite cut it