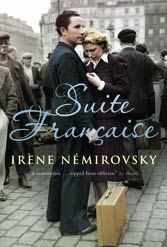 By Irène Némirovsky, translated from the French by Sandra Smith

As in any Suite the sections could stand alone, swift or adagio dances, linked by a unifying concern. In this case: the German Occupation of France. Part I, “Storm in June,” set in 1940, overviews an entire French society in mass flight from the advancing German troops. Such broad geographical and social panorama is perfect for Némirovsky’s keen eye for class ironies and her stiletto-sharp character analyses.

Part II, “Dolce,” continues this approach, in the complex relations between conquered and conqueror in a small, occupied French town. If the author’s incisive sketches of humanity can be faulted at all, perhaps the reader could wish for fewer and shorter summaries of character already conveyed through observation.

And naturally there’s the regret that Némirovsky, a Russian Jewish refugee in Paris, was not able to complete this work. Optimistically, she had pre-titled the last section “Peace.” She died in Auschwitz in 1942.