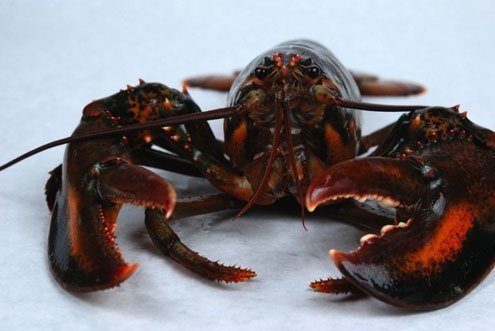 When your son befriends a lobster, linguine sauce can be a hard sell.
L

Our brains are deluxe smartphones. While adults can differentiate between sweetness cravings and the need to eat healthy foods (or try to), kids don’t bother. Why should they? Whatever a kid wants, a kid hopes to get.

But enough is enough.

I admit we Italians can be fixated on food and eating, particularly when it comes to our kids. Sometimes a dinner with kids is all about telling them what to eat (or what not to). Lorenzo is three-and-a-half and admittedly hard to please. Greens are a no-no, so are “strange things,” which he’s yet to fully define. My wife tries playing UN negotiator, pointing out that talking to Lorenzo about eating at the dinner table just makes things worse. It pressures him to eat my way.

A few days ago, I made him a carbonara, but as soon as he saw the browned bacon bits he looked appalled. I thought maybe he was worried about the poor pig, but that was my adult brain projecting itself into kid’s clothing. To him, it was a lot simpler: the browned bacon was “ugly,” period. (I immediately saw my poor dead grandfather, a butcher, turning in his grave.)

Once, on the run, I made him a quick portion of meatballs with tomato sauce. The result was oddly shaped meatballs. That they were tasty didn’t matter to Lorenzo. He just didn’t like the way they looked. According to him, someone else had already been chewing on them. Okay, yes, I admit they weren’t the most gorgeous meatballs, but I made them lovingly — and they were healthy.

What to do? I decided on a new strategy: indulge his imagination. He’d said my meatballs looked “previously chewed,” so I told him fickle goblins had pried open the fridge and munched on the meatballs at night. By the time I got into the story, he was already busy eating away.

Once I found live lobsters at the supermarket and took one home to make linguine sauce. No surprise, Lorenzo immediately saw something moving in the sink. It didn’t seem to bother him a bit. Instead, he asked if he could help with the cooking. I agreed. But first came question time. Phase one was “everything you’ve ever wanted to know about lobsters”; phase two was Lorenzo poking at the lobster — all this while I was trying to pull together the sauce ingredients.

Then a lightning bolt hit me. Lorenzo was playing with a living thing. If I killed it, which I had to, the whole thing might traumatize him. This was what to do, part two. I decided to try to tell him about all living things being divided between predators and prey. Sometimes predators become the prey, and so on. He listened very carefully before reaching a verdict.

Why? They’re delicious, I told him.

“No, we eat cows and chickens and pigs but not lobsters.”

At this point I was desperate. I’d run out of excuses and Lorenzo seemed determined to stand by his new set of dietary laws. I finally managed to distract him long enough to toss the lobster into the boiling pot. But when he came back to check up on his new partner, I had to come up with something — fast. The lobster, I told him, had jumped into the pot. Having done that, we had no choice but to eat it (typical lobster suicide and its aftermath).

My first thought was post-traumatic stress disorder. Except that he seemed completely at peace. I finished up the lobster linguine and doled out the portions. Picky Lorenzo will never touch this, I told myself. Do not try to figure out kids. He ate a full serving and asked for seconds. (Kid-cooks, memorize this line: “Never give up, never surrender.”)

Another day, knowing I’d be home late, I asked my mom to help me get started on dinner. Once there, I found Lorenzo working away at a plate of pasta with butter and Parmesan (which Italians usually eat only when they’re sick).

Lorenzo, mouth full: “Dad, Grandma made this amazing pasta and you never make it!”

I felt sort of awful hearing this but decided to deal with it kid-style, as in, “Do not give your opponent any sense of satisfaction.” I sat down to a dinner of milk and cookies.

These days, my life is easier. My younger child, a girl, gives me hope. She eats anything. Which makes me think even Lorenzo will eventually come around. Who knows, he might even get the hang of carbonara, never mind the “ugly” bacon.

This recipe should help you handle your whole family’s tastes.

— Place a very large pot of water over an open flame and bring it to a boil. Lower the heat and place a smaller pot in the larger one (double boiler style).

— Into the smaller pot, place 2 liters of water, a heaping spoonful of salt, 2 tablespoons of extra virgin olive oil, and the corn meal (a bit at a time).

— Mix the corn meal slowly (don’t let lumps form). Cover the small pot, letting the water in the large pot simmer. It’ll be ready in 60-to-90 minutes, depending on the freshness of the polenta.

At this point, you can flavor the polenta any way you want, maybe with melted butter and grated Parmesan with a pinch of nutmeg (Lorenzo-style butter and Parmesan). Or you can use tomato sauce and basil.

Another possibility is waiting until the polenta cools, cutting it into strips, and pan-frying it — then serving it either raw, with steamed or fried vegetables, or with olive oil. You can also make it into a breakfast porridge with eggs and bacon (or dip the strips into cappuccino). In short, polenta is a cure for all that ails fussy eaters.