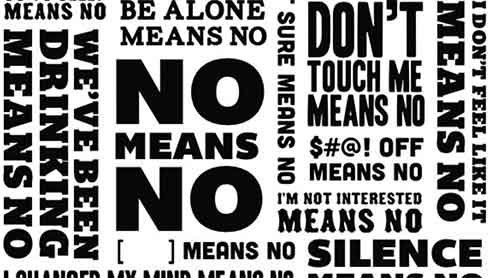 ollowing a lead I picked up on Facebook, I did a search for a new documentary about male victims of rape. I didn’t find it. What I did find, unnervingly, was a slew of testimonies from victims of sexual assault. The common thread seemed to be the urgent need to break the silence that allows the perpetuation of the crime.

Since rape is a crime of violence, the most vulnerable targets — children, women and minorities — are the ones most exposed. Though they constitute a somewhat smaller category, I know a surprising number of men, both hetero and homosexual, who have also suffered sexual abuse and rape. Unfortunately, like too many other victims, these men are often ashamed by what’s happened and say nothing.

Though I don’t fit the profile of a person at risk, I’ve had my own share of sexual scares as an adult.

At age 20, still very deeply hidden in the closet. I had the good fortune to join a University of Toronto summer archaeological research project in Egypt. We were there for two months in very basic living conditions. Our field camp was in a rural school building and its empty classrooms served as our sleeping areas and laboratories. Along with 12 other men, I slept on canvas cots in a room with only two small windows and one open door for air.

The project interpreter was Amir, the twenty-something son of an Egyptian antiquities official. He slept most of the day, drank tea all afternoon, flirted with the women on the project and allegedly spent most nights sitting in the ruins smoking hash. It soon became clear that he wasn’t accurately interpreting our instructions. Some of us began using drawings in the sand, mime, and very sparse Arabic to communicate directly to our Egyptian assistants. It worked.

One morning, just after sunrise call to prayer, I woke up with Amir sitting on my chest and holding a switchblade to my throat.

“Kiss me Mark, or I’ll cut your throat,” he said. At that moment I didn’t recognize the potential gravity of the situation.

“Kiss me Mark, or I’ll cut your throat,” he repeated.

“Get the fuck off me, Amir!” I pushed him and he fell on the floor, switchblade in hand. I dashed out of the room.

Having a drugged out interpreter put a knife to my throat while to trying to force me to kiss him was bad enough. Just as bad was that he’d somehow realized I was homosexual. The worst of it, however, was that he’d done all this in the presence of a number of other men, all of them older and some of them graduate students and professors. Not one had spoke up or come to my rescue.

The story swept through camp but no senior project officials said anything to me, pretending nothing had happened or that they hadn’t heard about the incident. Of course, I was too ashamed to say anything.

Years later, I was in a gay sauna having oral sex with a guy in a semi-private cabin. Another man entered and tried to join in. I brushed him away but he persisted. I slapped his hands back thinking he’d understand and leave. Next thing I knew, he was attempting to penetrate me. I swung around and slammed him up against the wall. “What’s wrong with you! Are you mentally defective!” I yelled. I stormed out of the cabin.

The latter incident has much in common with a situation faced by victimized women tarred with moral judgment, as in: “If she didn’t want to be raped she shouldn’t have worn that dress, or danced that way, or been in that place.” While it’s true poor choices can put people at greater risk, it’s not true that such choices constitute default consent to sexual assault.

As any man who’s ever been to a gay sauna will tell you, the choice of a sexual partner is selective, subjective and consensual. What’s more, many men see a gay sauna as a safe haven for casual sex. The alternatives — the side of the road, the woods, inviting a stranger home — are all far riskier. Was I in the sauna looking for casual sex? Yes. But like every other man in the place, I wasn’t inviting sexual assault.

I’m a big man, which gives me the means and strength to fend off attackers. I was not seriously hurt, either physically or emotionally. But incidents stuck with me. Unfortunately, most victims of sexual assault are powerless to ward off their attackers and are later burdened with guilt, shame and righteousness from their peers. Whether the victim is a woman or man isn’t the issue. Sexual assault is a crime of violence. We remain silent at our own peril.