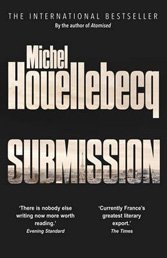 By Michel Houellebecq, translated from the French by Lorin Stein

In 1964, Stanley Kubrick dropped the prospect of nuclear war into parody’s hand basket like a grenade. In “Dr. Strangelove or: How I Learned to Stop Worrying and Love the Bomb,” he pushed a lunatic American general up against a presidential adviser with a Nazi past and a “Heil Hitler!” tic and emerged with U.S.-Soviet Union nuclear rumble that began with the infamous image of Texan riding an A-bomb into Russia. Black comedy was an unthinkably risky gamble, but it worked.

Novelist Michael Houllebecq barks up the same tree in “Submission,” a scathing and subversively alert “love the bomb” parody about France’s compliant transformation into an Islamic State. His narrator is François, a typically cynical and self-loathing forty-something French academic and an expert on J.K. Huysmans, the 19th-century naturalist who eventually converted to Catholicism. It’s 2022 and François is a lonely over-educated Parisian who aimlessly disdains materialism, has no relationship to his divorced parents (who die), but can’t get enough wine and whores. Politically apathetic, he goes about his despairing, self-involved days as Socialist-run France prepares for presidential elections. Only that these elections include the fresh-faced Islamic Brotherhood, which has positioned itself as a people’s movement and has a charismatic moderate named Mohammed Ben Abbes in charge (he has “the kindly look of the neighborhood grocer.”) These moderate Islamists are little more than oil-money spoilers with big ideas about Muslim family values (male) and education (cut it back) until the unfathomable comes to pass: the traditional left and right, both unhinged, back the Islamists to stop a National Front victory and civil unrest (exaggerated shades of 2004).

So, what’s a French Islamic state like? That’s where the fun begins — a word used guardedly given the Charlie Hebdo massacre. Baffled François loses his job when the now Saudi-funded and sponsored Sorbonne wants only converts to Islam. Teen wives, veils and flowing robes abound. French secularism is shoved aside in favor of loose petro-bucks. France blithely morphs into a loony pseudo-Qatar as pensioned François (still stuck between escorts and Youporn) gazes in glazed if apathetic amazement. The national unity coalition seeks an ancien régime Euro-Islamic model in the vein of medieval Christendom with some Moorish add-ons, a kind of Berber European Union intended to eventually Morocco, Egypt and Syria.

Like Kubrick, Houllebecq is at once earnest and flip. “We’re so used to the politics of right versus left,” a retired intelligence service insider tells François, “that we can’t see another way for things.” The other way belongs to anti-capitalist Ben Abbes, an Islamic de Gaulle who sees France at the center of a “greater Europe” and sells it on sharia law “with a perfume of exoticism.” What does the United States think? It doesn’t. Houllebecq gleefully avoids mentioning it, putting Islamic France entirely at the center of his hilariously Ptolemaic universe.

Yet underneath all this goading gamesmanship — “women leave the workforce en masse…” allowing Harem-like wives “to remain children their entire lives…” — is a fairly traditional denouncement of aimless middle class life that while digging in a different garden with different tools nonetheless forages for and fetches the same old bone, “the atomization of society,” or human alienation, this time “repaired” by disciplined Islam. Just as Kubrick used wild caricatures to lampoon the potential for military and political lunacy, so Houllebecq uses his Islamists and their intellectual allies to create a man, “average Western man” François, who’s too bored to do think much past sexual self-indulgence, until that, too, withers, and he’s left with hemorrhoids, cigarettes and whisky. He’s a Western failure, just as existing Europe is a failed Western project, while anti-welfare state Islam, by demanding submission, provides insidious ironic relief — taking the place of communism in Cold War spoofs. At least with Islam, thinks François, he’ll get a bunch of girls at once, one of whom will save him from a life of microwave dinners, all this while “imams 3.0” busily convert the rest of the oddly non-restive natives. How does François see his immediate future? “As they say in English, supercool.”