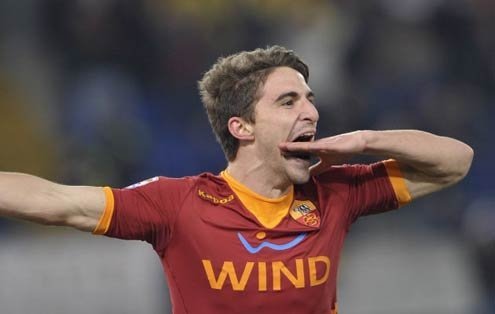 Borini's trademark goal celebration has become a familiar sight at the Stadio Olimpico this season.
T

wenty-year-old Fabio Borini, a newcomer to Roma, underlines the rewards on offer to clubs who trust the game’s most precocious talent.

Though Borini’s prodded finish at the back-post was ultimately indecisive in Roma’s second derby defeat of the season to city-rivals Lazio, his eighth goal of the season was converted with the sort of killer instinct rarely found among players of such a tender age.

The way he anticipated Juan’s goal-bound effort, which saw the ball ricochet off the crossbar into his path, before striking home with one clinical touch, closely resembled the renowned predatory prowess of opposition marksman Miroslav Klose, 13 years Borini’s senior and a German national team staple.

But Borini has established himself as Roma’s top striker on merit. His remarkable work-rate and enthusiasm for running the channels have won the hearts and minds of the Curva Sud, the southern curve of Rome’s Olympic Stadium and the traditional den of rabid Roma supporters. Borini’s ability to find the back of the net with regularity has intrigued national team coach Cesare Prandelli, who handed him his first cap in a recent friendly defeat against the United States. In January, his adopted club opted to buy him from Parma on a co-ownership deal for a mere €4.7 million.

So positive has been his impact that a Roma without Borini is now scarcely thinkable. Against Lazio, Enrique was left with the unenviable decision of which outfield-player he should sacrifice to replace red-carded goalie Maarten Stekelenburg with reserve Bogdan Lobont. He chose Lamela, safe in the knowledge that Borini’s industry could be counted on to alleviate the pain of his team’s reduction to 10 men.

Borini’s success story is certainly a pleasing one for the game’s purists, for whom the fruits of well-placed trust and investment in talented youth taste the sweetest. It should also represent food for thought for those owners who regard colossal expenditure for individual stars as the surest way to succeed on the pitch. One need only look at Borini’s former club Chelsea to see how resoundingly emerging talent can triumph over excessively expensive superstars.

Fernando Torres’ measly five-goal haul during his 14-month nightmare at Stamford Bridge is a tragic return on the £50 million spent on the former Liverpool hotshot. His January 2011 transfer does not compare favorably with the £6.5 million the Blues have paid in installments to Manchester City for the services of fellow striker, Daniel Sturridge. Without the 22-year-old’s 11 goals this season, and with Torres constantly misfiring, the London club would be struggling even more than they already are to qualify for the Champions League, an objective they haven’t failed to reach in a decade.

On occasion youth comes at a price, particularly if the commodity in question is the subject of fierce competition. Borussia Dortmund shelled out €17.5 million this January for Marco Reus, Borussia Mönchengladbach’s prolific 22-year-old forward. In doing so the reigning German champions outbid their wealthy Bundesliga rivals Bayern Munich to secure one of the hottest properties in European football. His goal-scoring rate of one every two games suggests that he will prove a fine asset.

What makes youngsters like Borini, Sturridge and Reus such sound investments has much to do with their maturity as their physical and technical abilities. Able to motivate themselves to reach new career-heights, all three have entered the plans of their respective national teams ahead of this summer’s European Championships.

Talented youth has greater incentives to get to the level that others have already achieved. Success can generate complacency. Inter Milan’s treble-winning champions of 2010 have lost their competitive edge drastically in recent seasons. Even Torres’ current predicament may also be in part psychological.

Manchester United’s constant supremacy in the English Premier League is thanks largely to Sir Alex Ferguson’s willingness to constantly introduce capable youth into the first-team, something he has done throughout his 25-year reign at Old Trafford.

With UEFA’s financial fair play rules set to come into effect for the 2013-14 season (European clubs will have to break even based on information provided this season and next), signings of Borini’s ilk are clearly amongst the shrewdest. His price tag likely to increase in forthcoming years, Roma look set to benefit both on and off the pitch.