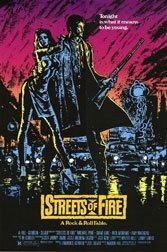 Few films have pulled off the charisma of director Walter Hill’s “Streets of Fire,” an anachronistic romp inside a dilapidated 1980’s city pinned back by 50’s teenage trends. There’s something dystopian — if not charming — about a place where punk rockers rule the sock hops and the greaser culture is more David Bowie than macho. Pump up the volume with a new wave soundtrack and Giorgio Armani wardrobe and you’ve got a cult opera of rock ‘n’ roll proportions.

The storyline doesn’t make pace with the style, but it’s enough to keep viewers gawking. Ex-soldier Tom Cody (Michael Paré) is back in town after a two year disappearance to rescue his rock star ex-girlfriend Ellen Aim (Diane Lane). Ellen’s kidnapped mid-performance by witless motorcycle gang “The Bombers,” whose vampiric leader Raven Shaddock (a perfectly cast Willem Dafoe) wants her as a plaything. A ne’er do well with uncanny street-fighting skills, Cody doesn’t much care to save the woman who left him for her stage manager, geeky moneybags Billy Fish (Rick Moranis). Until Fish, a crackerjack at fiscal manipulation, sweetens the deal with ten grand.

Fast forward to the good stuff. Amy Madigan, a charming kick-in-the-pants as Cody’s tomboy sidekick McCoy, seems to have jurisdiction over all the snarky one-liners. Dafoe’s Raven is a compelling villain even in laughable vinyl overalls. Lane’s Ellen, by contrast, looks bored (and boring) when she’s not singing. Her thunder gets stolen by actress Marine Jahan (of “Flashdance” fame), gender-bending in a sexy cameo at the Bombers’ bar.

When the magic threatens to run dry, a combat sequence fought with railroad hammers resurrects excitement. Thankfully, the underlying love story avoids the obvious. “Streets of Fire” received little critical or box office success, but it’s an overlooked candidate for best popcorn flick of the 1980s.