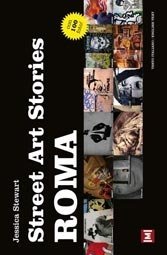 tewart’s book offers a selection Rome’s most celebrated street artists through photography and text, and as such the book is a first, a slender, light-hearted introduction to the city’s street art scene that reflects the author’s personal experiences in the city (she got here in 2005).

Stewart covers 15 of the city’s most important artists, as well providing a kind of roadmap to where pieces are commonly located. The book is atypical of its genre, since most street-art books let photographs do the talking (see Banksy’s 2006 bestseller “Wall and Piece,” a self-portrait through imagery.)

But Stewart likes words, sometimes to her detriment. The text here is in both English and Italian, and if Stewart has a shortcoming it’s that she often doesn’t distinguish well between presenting the artists she likes and musings about her own struggle to establish herself as a connoisseur. The narrative can be disjointed and her disdaining of classic methodology can make it seem as if there was nothing happening before she got to Rome.

What you get in the end is the story of a young woman’s discovery of Rome’s secretive and light-shy underworld, illustrated by four years worth of photos. But while anecdotes about budding friendships with artists work well in a blog (and Stewart’s has won prizes), they don’t make a book. Next time around, someone should focus on the artists, because they deserve it.