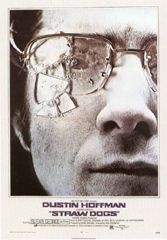 Peckinpah adores bringing these ingredients to a boil: weak men, cruel strangers, civility pushed to the brink and ripped apart. No mystery the rest of the way: David snaps, intellectual veneer collapses; it’s kill or be killed. The climax is orgiastic, grotesque, and too-often gratuitous. But that’s Peckinpah. In David Sumner, he transforms an intellectual pacifist into an irrational torturer to prove the two coexist. Disturbing.