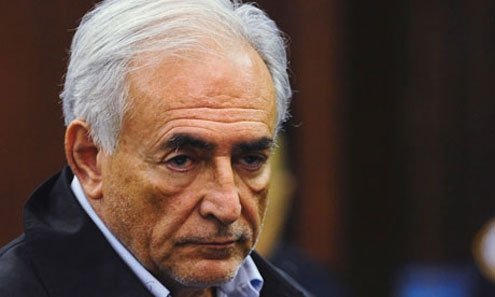 Dominque Strauss-Kahn: No available wormhole.
I

n an episode of a popular American crime drama, a team of special agents tries to thwart an Islamic terrorist planning an attack on Los Angeles. The last line of defense isn’t an automatic weapon but a sex tape that the terrorist shot with a local stripper. Fearing his Islamist buddies will discover his lapse, he attempts to retrieve the video and falls into a police trap.

The message is obvious: Licentiousness is at once arrogant, enticing and risky.

The fiction is related to the real-life case of disgraced former International Monetary Fund chief Dominque Strauss-Kahn, but not only in support of a traditional scenario in which woman are victimized by the rages of powerful, self-indulgent men.

Sexual abuse is as old as male history. Tsars, kings, princes and generals reveled in illicit liaisons, some vicious. The dangerous ones made for drama and occasionally produced religious reprimand. Savagery flourished because one gender made all rules, or failed to bother.

The consent laws that led to the criminal acknowledgement of rape and pedofilia emerged with enlightened thinking and acquired girth in the 19th century, as cities grew in size and criminal acts with them. Punishment for sexual misdeeds systematically entered jurisprudence in tandem with an awareness of the baseness of World War I. In Britain and the United States, it paralleled the growth of women’s emancipation and suffrage. Germany followed suit in 1919 but France (significantly) waited until after World War II, a conflict that summoned anti-humanitarian heinousness represented not only by the murder of Jews but also by the sexual barbarism wrought by advancing and retreating armies.

A wish to rein in both primal and calculated violence led to a second wave of legal restraints, in which the powerful were invited to recognize, or else, at least in the Euro-American West.

But criminally restricting the primal often does little more than scatter it. Above-the-law predators turned to sexual procurers and exacted vows of silence. Sexual lies acquired their own checks and balances. Payoffs and blackmail kept the influential out of harm’s way. Serious abuse and rape, though finally open to demarcation and denunciation, maintained its shame component, particularly in the colonial atmosphere fostered by major global organizations such as the United Nations and international postwar banks.

The sexual subjugation commonplace in the Middle Ages was thus made to fit the clandestine tapestry of the “don’t tell” European 20th century. That powerful men were potentially reckless womanizers, even dangerous ones, mattered little if aggression disposed of the protective privacy needed to keep doors and mouths shut.

Strauss-Kahn and men like him (most over 60) are products of this cosseted realm. Many came of age at a time when fathers or uncles still took their sons to brothels to lose their virginity, promoting a chattel-like vision of women that spared only “virgin” mothers. These men rose to power at a time when education and social status corresponded with a protection against untoward intrusion, a pattern that the United States, love it or hate it, has been a forerunner in disrupting.

Like TV’s invented Islamic terrorist, the 21st-century powerful are moths to temptation, the urges to which they’re vulnerable invited by the exaggerated indiscretions licensed by a hypocritical, privacy-deprived democracy — or so say the resentful.

They remain more comfortable within the walls that still partially protect the medieval remnants of European (and Arab) sexuality. But that fortress doesn’t extend to New York City, where carnal abuse was long ago deprived of its oldest and most extensive excuse — temptation — and labeled instead only as violence.

Assuming he committed rape, Strauss-Kahn conforms to the walking time bomb that a sexualized culture is prone to detonate, namely a late middle-aged man suddenly driven from tasteless indiscretion to brutal aggression.

Where Paris and Rome might find means to rationalize the transformation — whether through male complicity or cultural comprehension based on intellectual deference — New York does not. This reality naturally shocks a continental generation that always had, or expected, a companionable wormhole in which to bury crudeness. Its absence naturally gives wide berth to European conspiracy theories and accusations of Puritan sexuality, neither of which apply to rape.

At the same time, a flourishing semi-pornographic culture doesn’t help with the hounds. While the Web didn’t foster Strauss-Kahn’s alleged rape nor is there any evidence to directly connect the two, the online landscape roils volatile libidos in a way no instrument of mass culture has ever done before, promoting fantasies of an endlessly incendiary sexual playing field populated by temptresses.

A tool that yields valuable participatory candor also flatters a rawer side. That a fuse is short is often known only after it’s lit.