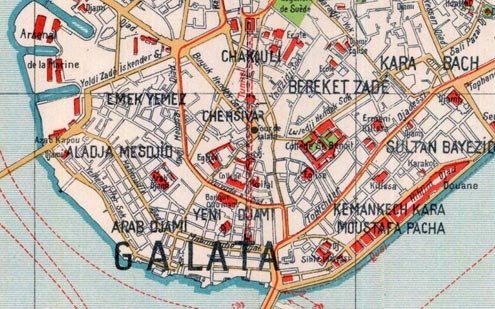 he streets tumbled helter-skelter around me, each one narrow, steep, and set at a zany angle to the next. Grid system? Forget it. There weren’t even street signs.

Picking one that seemed, more or less, in the direction I needed to go, I stepped carefully down a flight of concrete steps, dodging two men hauling huge boxes uphill. I avoided a puddle and glanced at the storefront as I passed. Another hardware store. The window was heaped with baffling bits and bobs I wouldn’t know the names of even in my own language.

Ah, a street sign. I looked at the Turkish letters on the wall and down at the labels on my map. They didn’t match up. Well, at least I knew I was on the European side of Istanbul — or so I thought. That was a start, right?

Living in Italy, I’d learned how to navigate equally perplexing streets with equally impervious maps. I’d gotten a handle on Rome’s cobblestone confusion and put mental order to the chaos of Naples. And now, here I was, back at square one. Just as confused as ever.

I examined my map again. The streets looked like nothing so much as a handful of vermicelli thrown onto a piece of paper. Swallowing my pride, I smiled hesitantly at an old man who stood outside of one of the shops.

“English?” I asked, unnecessarily. “Little,” he said. I pointed to where I wanted to go on my map. He squinted at the paper. The stream of Turkish that followed was less useful than his hand gestures: down the street, and to the left.

I went down the street and to the left. And, just as promptly, got lost once again.

It wouldn’t be the last time. Over the course of four days, I lost my way on both the city’s European side and on its Asian side, aboveground on the street and underground in the Tünel, the 150-year-old underground railway. Sometimes, simply standing on a street corner, map in hand, my expression looked so sufficiently confused that a passersby would stop just to ask if I needed help.

I loved every minute of it.

It had been a long time since I’d felt, so fully, like a foreigner. Yes, I’m still a straniera in Italy, but Italy is home, a place with quirks I understand, with a people who I look enough like to be mistaken as a member, and with a language I can (usually) follow.

Here? Not so much. And to my own surprise, given my usual approach of do-as-the-locals-do, the sensation felt… liberating. Yes, that’s right, that’s my bright blue “Lonely Planet” guidebook tucked under my arm, and yes, I’ll take it out, right here and now, to read about the history of what I’m looking at. Yes, I’ll buy some exotic-looking sweets without any idea of what they are, and take photos of both them and the market stall, and eat them with that special thrill that only comes with tasting something for the very first time. Yes, I’ll ask someone for directions, again. (For the record, that part did embarrass me, because I always asked in English. There’s no excuse for that).

In Kadiköy on Istanbul’s Asian side, a street vendor was giving me directions, in Turkish. Hearing our struggle to interact, a passing college student offered to walk me to my destination instead. In Italy, I’d have said “no” and insisted on finding it on my own. But this time, embracing my new, total tourist approach, I accepted.

As we walked, he told me about growing up in Kadiköy, and how he preferred it to the European side, and what university was like. “When I finish my studies, I want to get a job in the U.S., or Australia,” he told me. Everyone wanted to be a foreigner somewhere.

By the end of my stay, this foreigner started to feel like less of one. I successfully had taken the ferry, and metro, and bus. I stopped taking out a map to check my location every ten minutes. I even gave a friend I met up with (also the city visiting briefly) directions — and, more importantly, found out later that the directions had worked.

If I hadn’t felt like such a straniera, those little accomplishments wouldn’t have seemed like such large ones. And maybe I wouldn’t have been as open to asking for help, or meeting locals like the Kadiköy student.

I still think that the best trips mean doing as the locals do. But travel is also about embracing being a straniera — and relinquishing the pride that keeps you from taking a picture, trying a new food, or, most of all, from asking a stranger for directions.