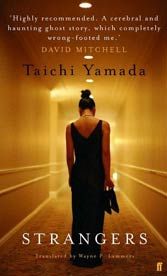 By Taichi Yamada, translated from the Japanese by Wayne P. Lammers

Take “The Sixth Sense,” transfer the trappings to Tokyo, narrow the focus to two principle characters: there, that’s it. Yamada began his career as a script-writer and his novel has the feel of a simmering horror flick. Divorced Harada lives alone and writes TV scripts. He travels to Akasaka where by chance he meet an elderly couple he swears are the images of his long-dead parents.

Burn victim Kei, his neighbor in his Tokyo apartment complex, enters his life apparently to console him. Then she, too, starts blending into apparition. Who then is dead, who living? Yamada keeps you off balance until he throws a fierce left hook at the end. This is a fine-boned ghost story only a Japanese modernist could construct.