Strangers on a Train 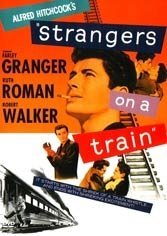 Hitchcock’s lastingly deft study of madness, murder, and obsession and is perhaps the finest slow-burner of his long career. It opens benignly, almost awkwardly, and remains parked, concealed almost, until the beginning of a thumping, whirlwind climax that features a literally thrilling assortment of physical and mechanical motion, including a tense tennis match and the movie-stealing runaway merry-go-round.

Farley Granger is Guy Haines, a celebrated amateur tennis player who meets odd and Svengali-like Bruno Anthony (Robert Walker) on a New York-bound train. From the start, dapper Bruno knows far too much, including social climbing Guy’s love affair with a senator’s daughter and the purpose of his trip, to agree on a divorce with his unfaithful wife Miriam. From the moment pushy and intrusive Bruno introduces the idea of the possibility of a perfect murder, “a criss-cross,” he calls it — with his killing the inconvenient Miriam and Guy returning the favor by murdering his loathed father — Hitchcock enters stalker territory that is destined to thicken. Sure enough, the driven Bruno makes shockingly good on his murderous end, using a cigarette lighter Guy left behind on the train as leverage to force the panicked younger man’s hand.

Bruno is a self-styled “very clever fellow,” a wealthy and charming lunatic, his sly grin chock with madcap schemes. Pre-“Psycho,” Hitchcock serves up an eccentric mother to lay the foundations for Bruno, whose repressed, homoerotic mischief has grown into full-blown adult wrath. Walker portrays this delusional instability with exceptional bravura, forcing himself to the center of the film and insinuating himself as Guy’s dark-side double. “Good” Guy’s sudden “why me?” predicament also reflects Red Scare paranoia prevalent at the time.

Two set pieces, the amusement park killing (an arousal-turned-murderous) and the climactic 10-minute focus on the out-of-control carousal, are rightly legendary. Hitchcock turned over Patricia Highsmith’s debut novel to Raymond Chandler for a screenplay, but the men bickered and parted ways, with the final version cobbled together based on Hitchcock’s vision. The 33-year-old Walker, long troubled by mental illness and drug addiction, died only two months after the film’s June 1951 release.